Meet Weiss. He came to stay with us shortly after Thomas’ grandmother left for home from her short stay here. Weiss’ family was off to Hong Kong for a few months, so they placed him in our care while they were gone. 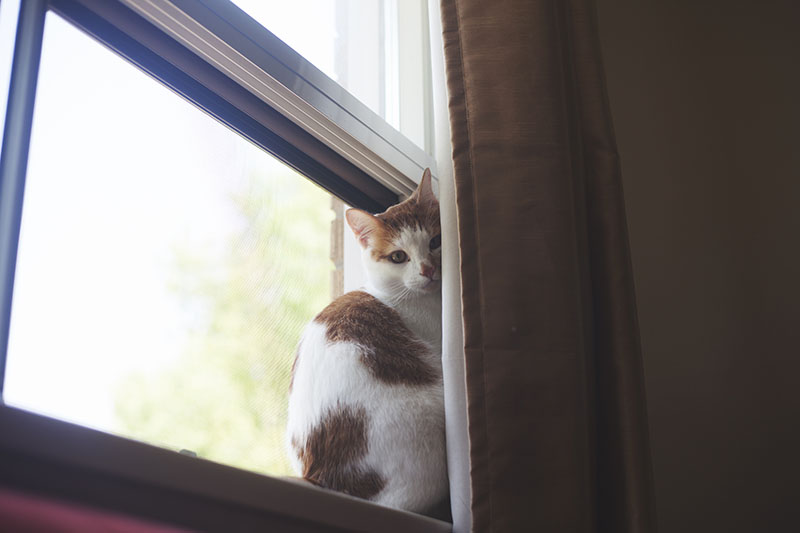 Things started out great with Weiss. He was very shy for the first few days, hiding behind furniture until feeding time, remaining exceptionally quiet, and all around making pretty much no trouble at all. That quickly changed as he started becoming used to his surroundings.

Weiss started showing off his too-clever-for-his-own-good personality around the end of the first week. We’d tried to keep our bedroom off limits by closing the door, but because the door didn’t close quite perfectly, and because it was high enough off the ground that Weiss could get his paws underneath it, Weiss quickly learned he could pry the door open and waltz inside whenever he wanted to. 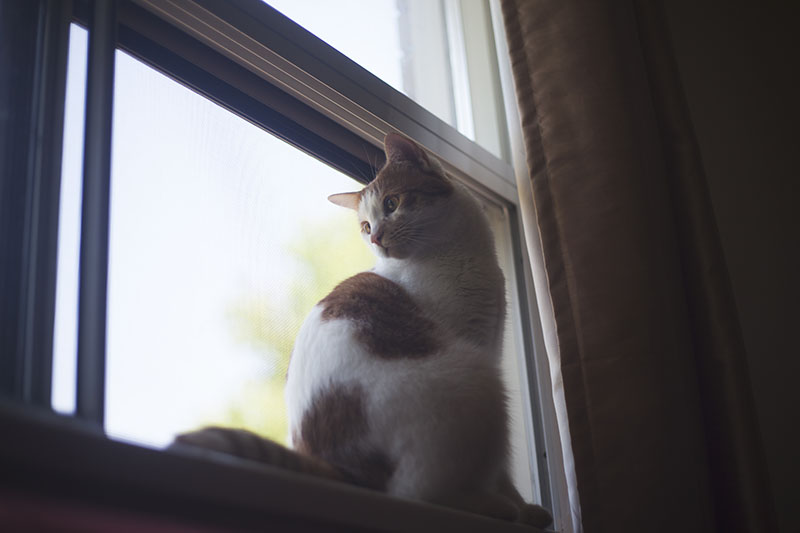 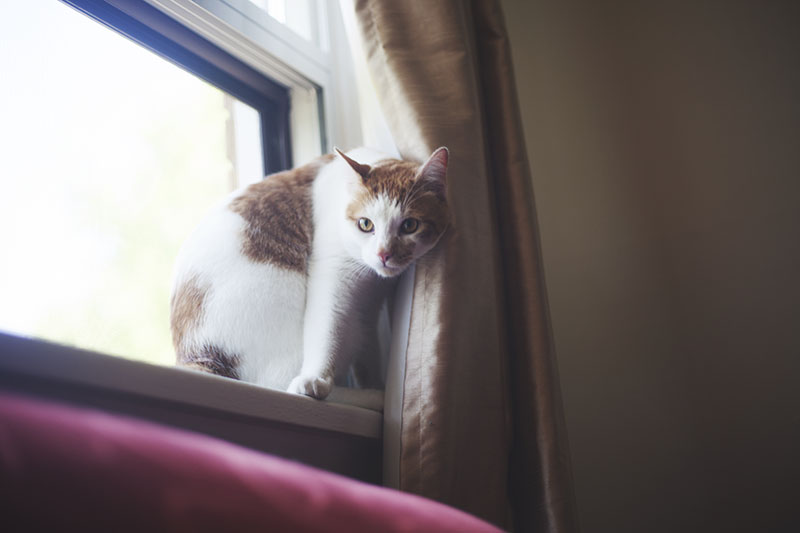 Quickly tidying up our bedroom so that Weiss could roam free inside, we had our first little taste of just how smart this cat could be.

Weiss, just like many other cats, has an obsession with cardboard boxes. His owners were kind enough to bring some over with them when they dropped him off, and these were literally his favourite spots to “hang out.”

When Weiss was being bad, scratching at the window or sticking his arms under the doors, sometimes, to ‘punish’ him, we’d put him in his box and make him sit. I’m not quite sure he took this as a punishment at all. 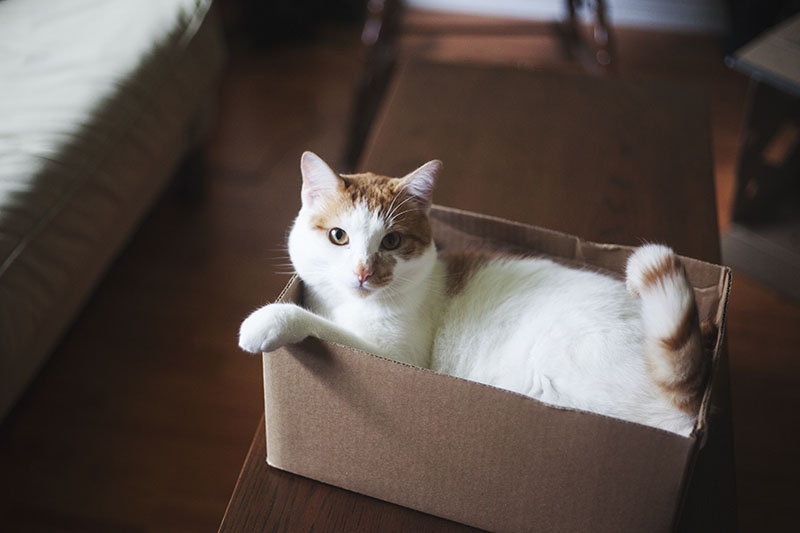 But we kept trying, hoping one day he’d figure out exactly what we liked and what we didn’t. Of course this smart little cat did figure out just that. The problem was, whatever we didn’t want him to do, he’d do more of, as though being naughty gave him some sort of a high.

For example, we have a two-mirror closet door in our bedroom, one of those ones on railings that you slide open. Well it only took Weiss about 15 minutes to figure out how it worked. We put down a bamboo stick to keep him from being able to scroll the door open, but he still tried, and quite often.

Then he’d fall asleep in some terribly cute position on my office floor while I was working away at my laptop and all would be forgotten. Honestly, how could anyone not forgive such a cute sleeper. 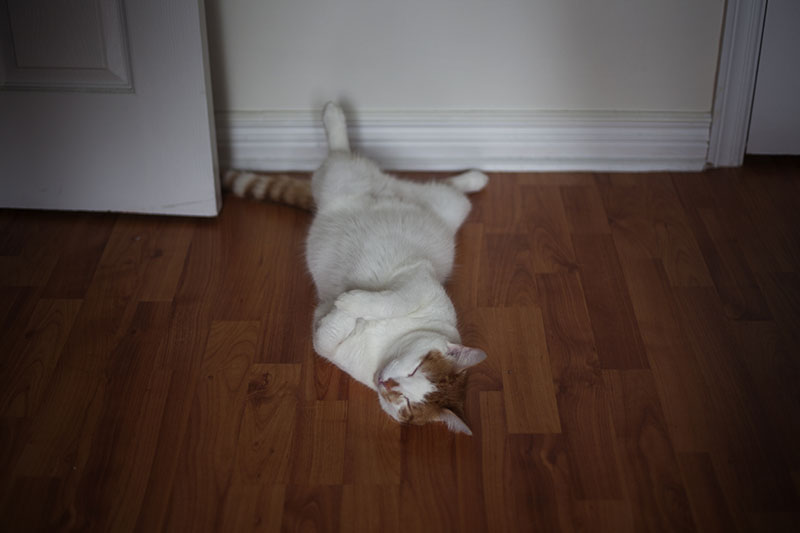 So we continued on this way, he quite obviously looking for trouble all morning, then us immediately forgiving him as soon as he took one of his adorable cat naps somewhere in the house. 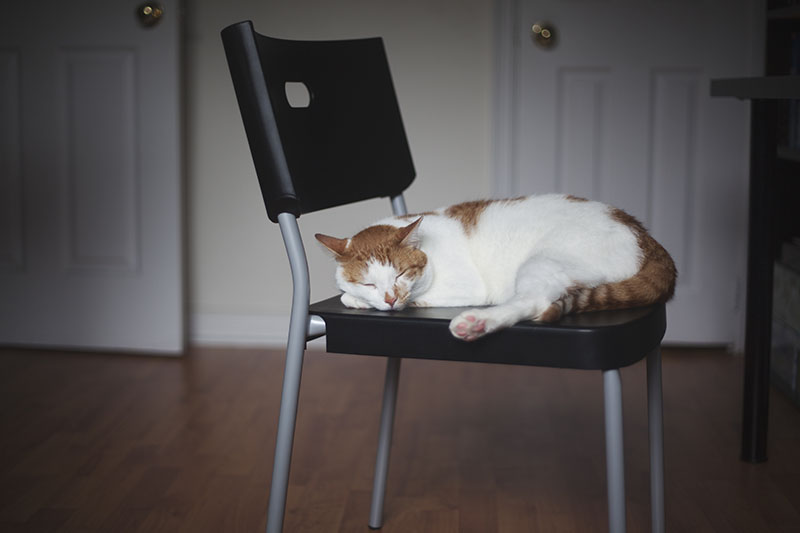 It was especially cute when he’d sleep on our bed, but he’d never do so when we were asleep. He wanted the whole bed to himself. 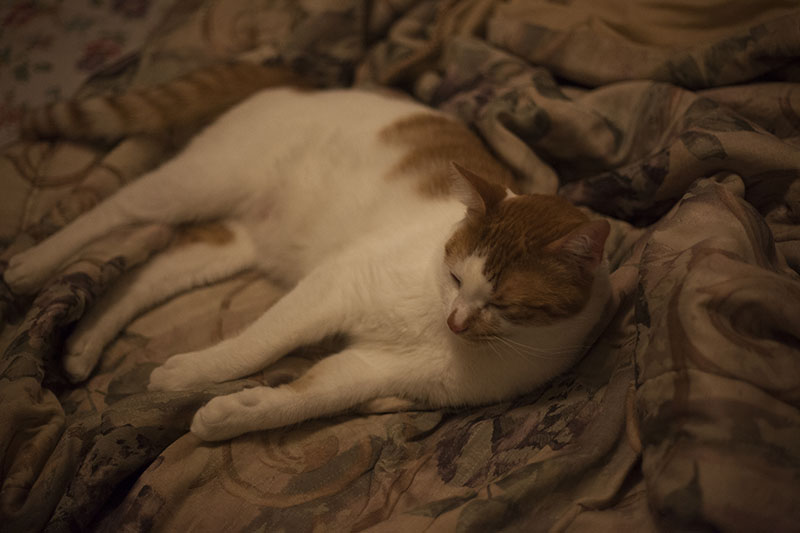 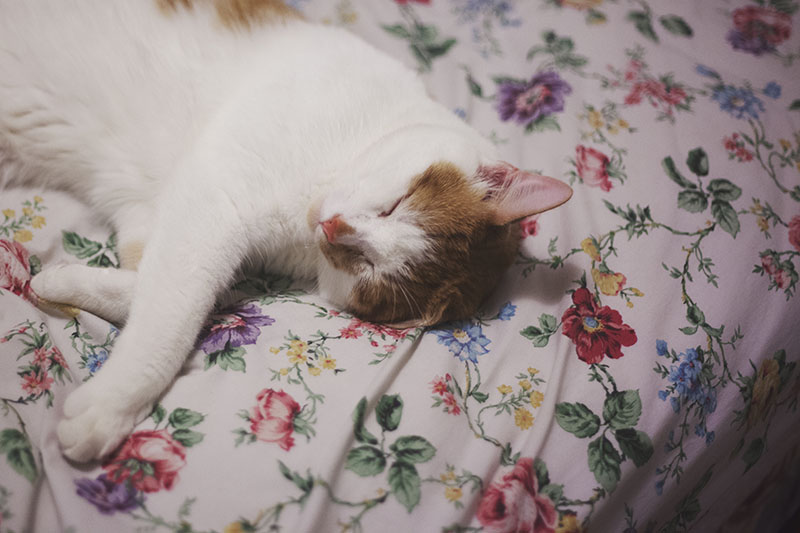 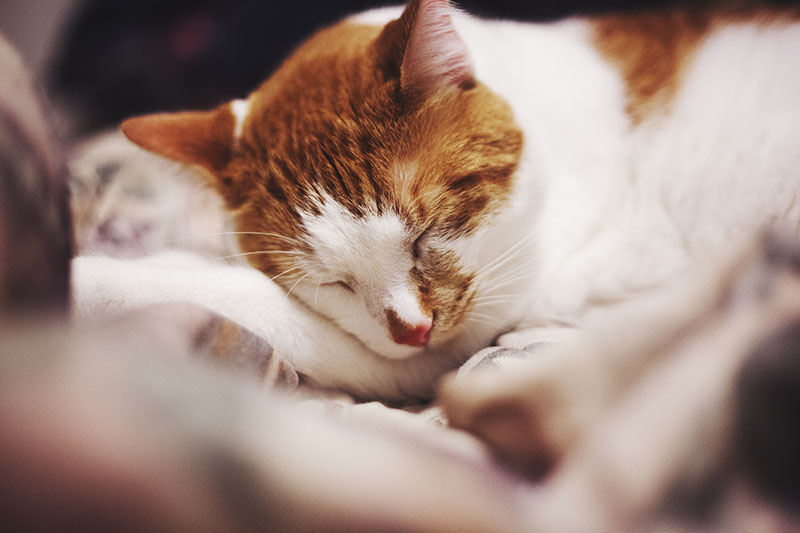 There were other cute moments of course. Remember how much Weiss likes boxes? Well we thought it’d be funny if we could get him to fit into the smallest box we had: one of those 12 can soda boxes. Of course Weiss is certainly not the skinniest cat in the world, and he’s definitely not the smallest (I actually don’t think I’ve seen a cat that long before!), yet he still managed to fit not-quite-perfectly into one of these. 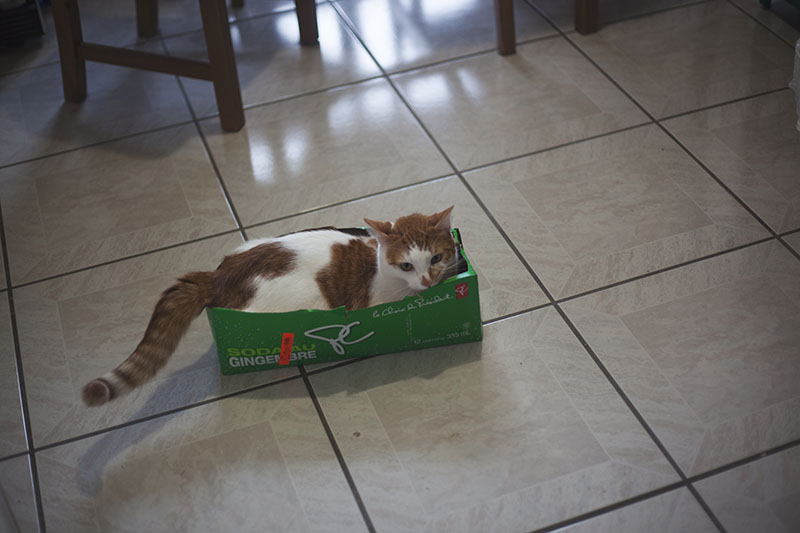 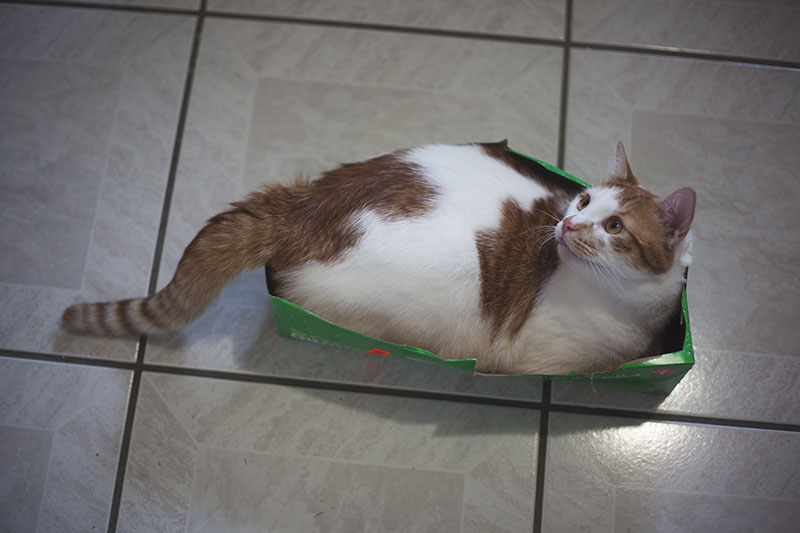 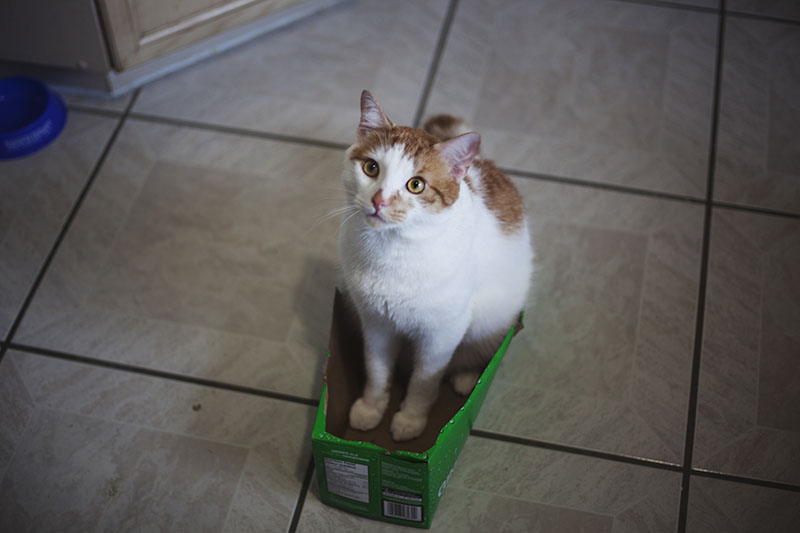 He looked quite content with himself once he’d accomplished that task.

Weiss did other cute things while he was here, lied on a bunch of boxes (made or flattened), jumped into our laundry when we were trying to sort it, hid under our dressers for his afternoon nap. 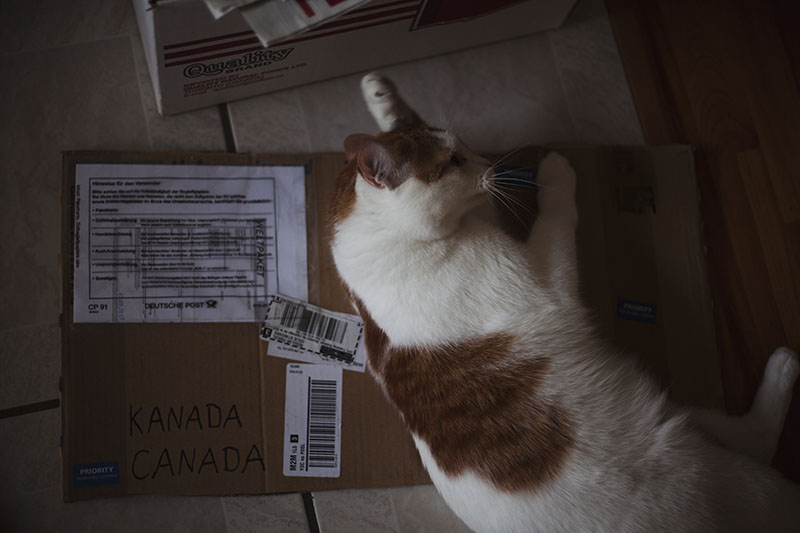 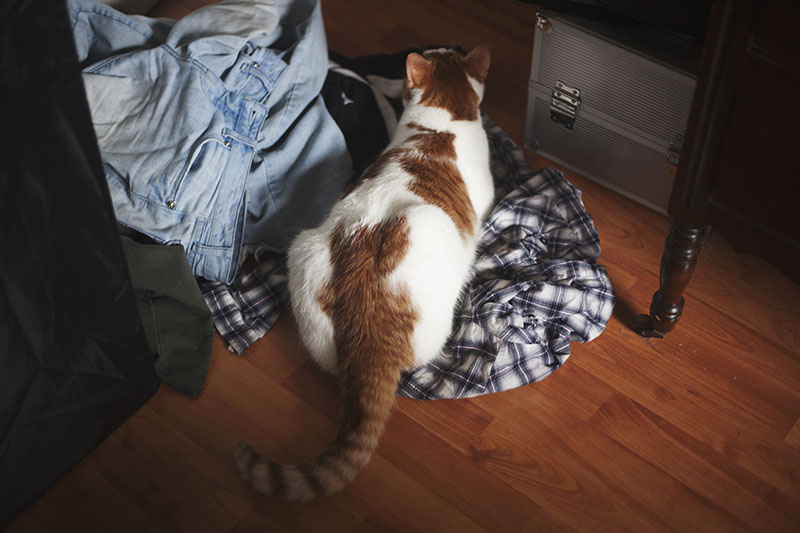 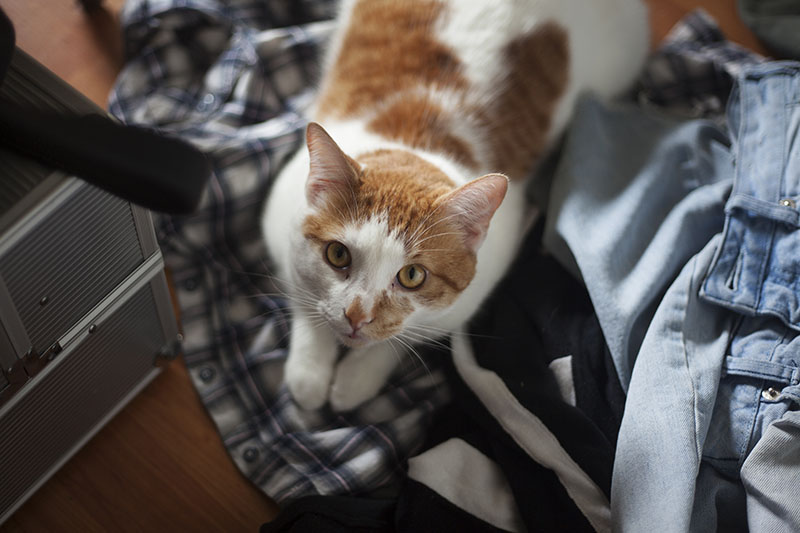 And of course we also made him sit in adorable spots to take oh-so-cute pictures of him. 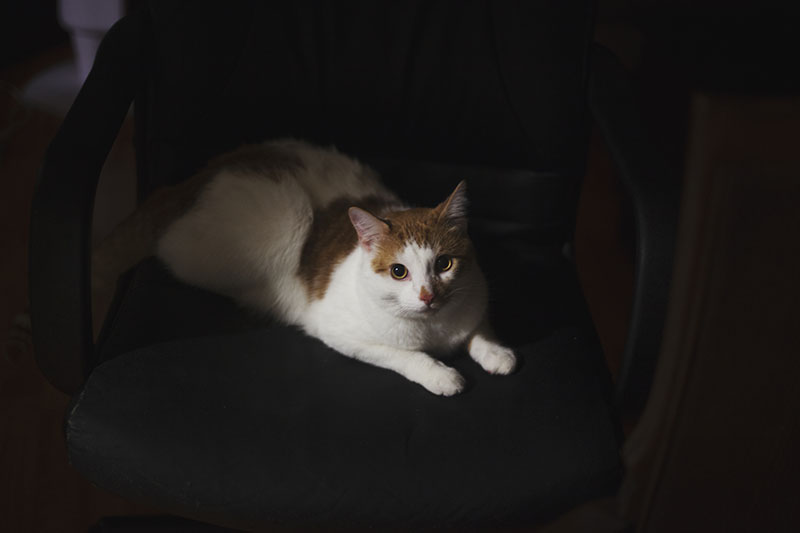 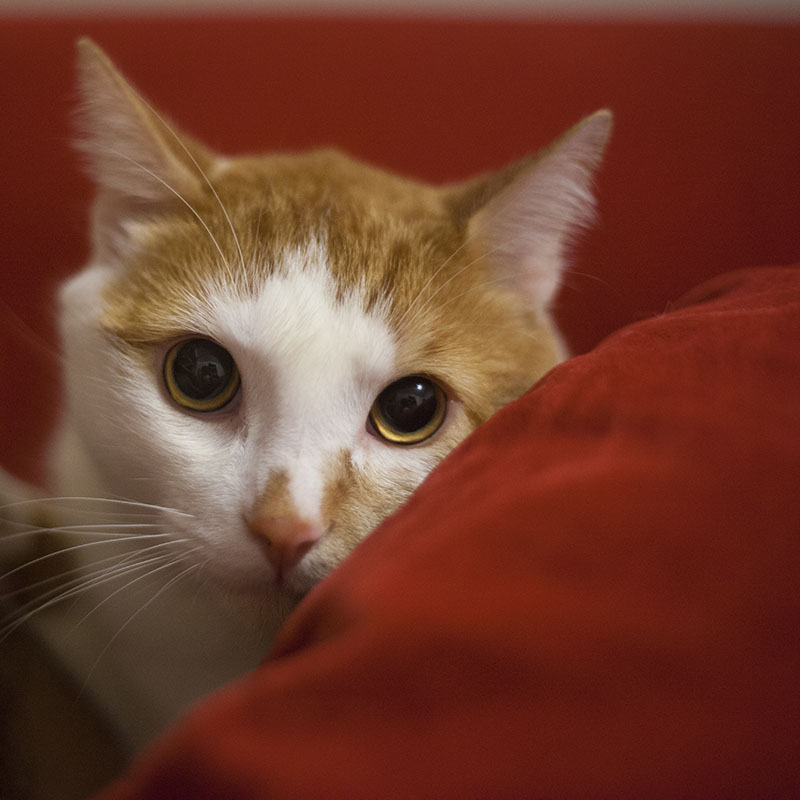 Weiss’ favourite thing to do was sit by the window. He’d literally spend hours doing so, until it got dark. Then we’d usually have to shoo him away because he kept scratching at the window screen whenever a bug landed on it, the bugs being attracted to the light from inside. 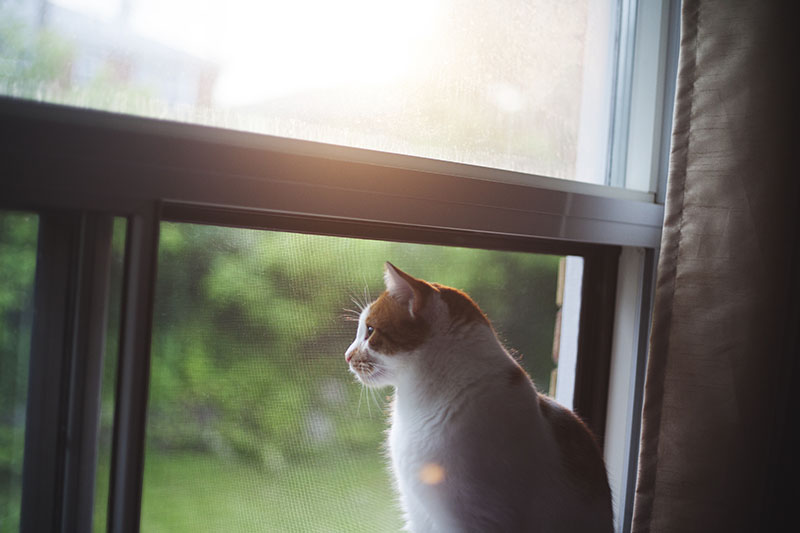 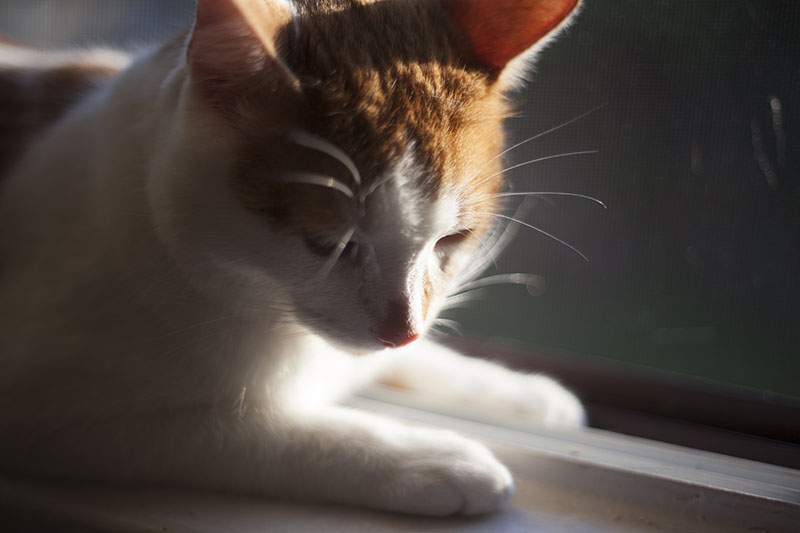 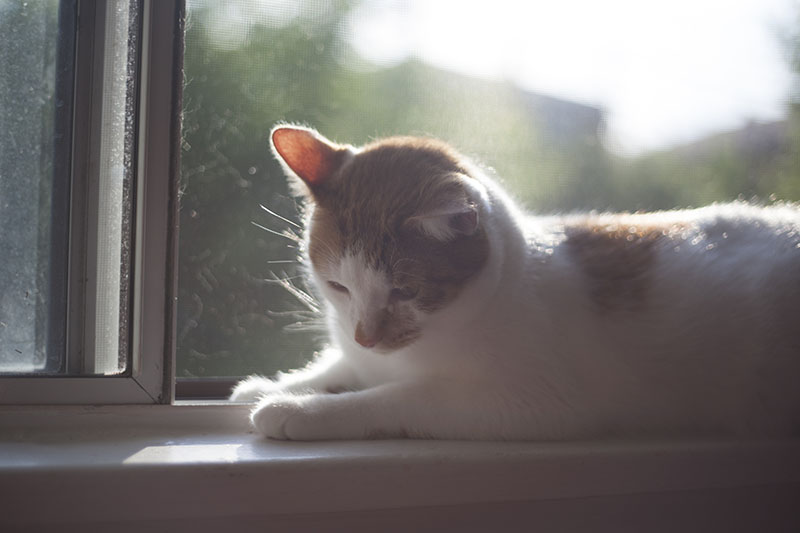 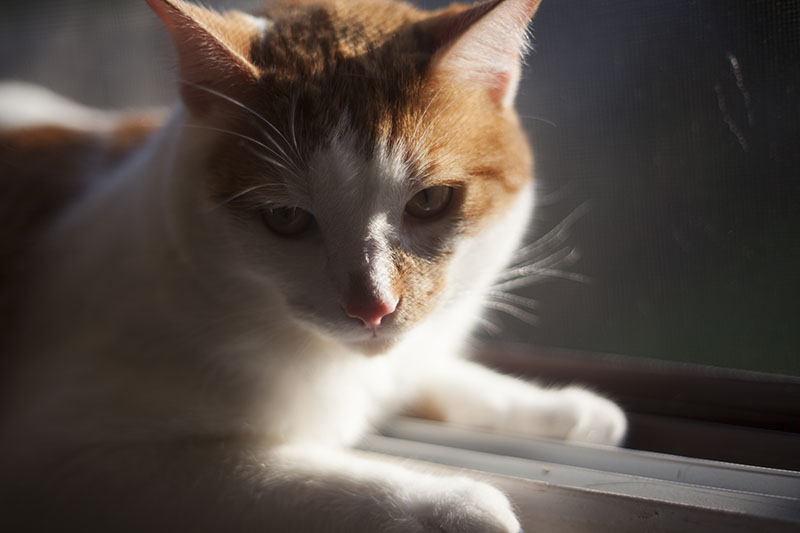 Weiss’ window-sitting habit led to a strange sequence of events. One evening he was at the window, and hadn’t begun pawing at it because no bugs had arrived yet, while he spotted something outside. He started meowing and I looked out the window. It was a pretty little cat, who we both took to be female because of just how tiny and adorable it looked. Unfortunately, the cat was flighty and after some time of meowing back and forth with Weiss, it took off. 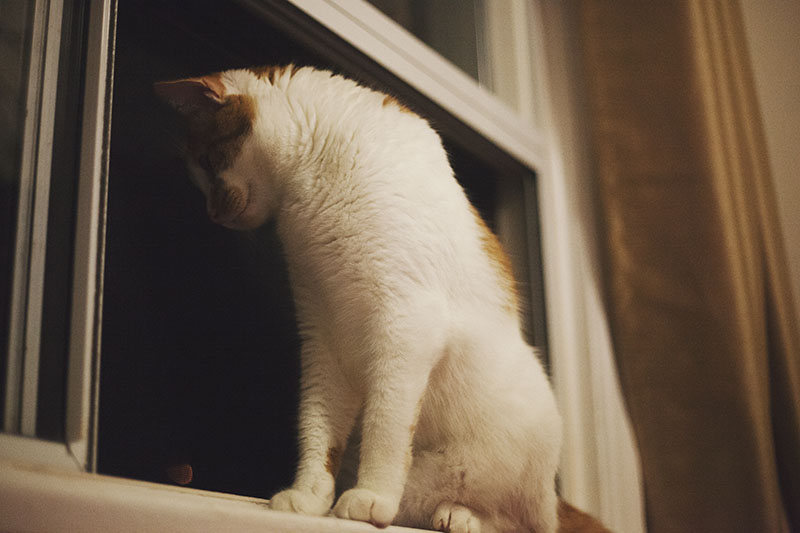 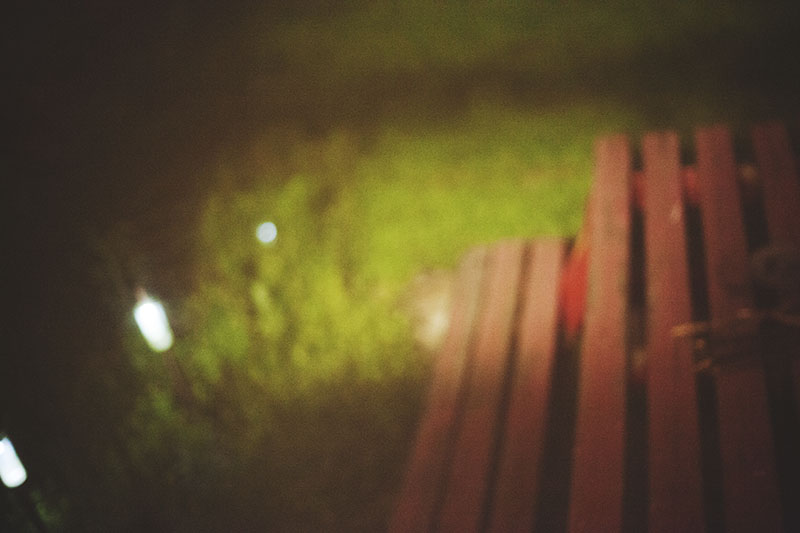 I kept trying to get pictures of the cat, but it was just too dark whenever it showed up, and the cat would hide under the picnic table for a while, or wander off in places we couldn’t see it (in the picture, you can see the grey outline of the cat next to our picnic table). To top off the difficulty of getting a good shot, whenever we shone a flashlight, the cat would dart away.

We joked that Weiss had fallen in love, because every time the cat came, he’d meow and meow, alternating from the window in our bedroom to the window in our office, wherever he could get a better look of the shifty cat. We tried to go out and feed the cat a few times, but the cat wouldn’t come and get the food until at least five or ten minutes after we went back inside the house. So we settled on just watching the pretty cat from the window whenever he happened to come by.

(Find out what happened next here).