Yesterday morning Thomas and I took Avery to my mum’s house while we were having brunch with my family. A pretty frequent occurrence, as we have brunch with my parents and brother every Sunday, but we end up taking Avery, I’d say, around once a month. My mother has a cat, Walker, and my brother has a cat, Beau (a cat we rescued and ended up having him adopt on our behalf – since we’ll be moving to the U.K. soon and didn’t want to take two cats on a plane with us).

Anyway, long story short, this is what Walker did to Avery today – 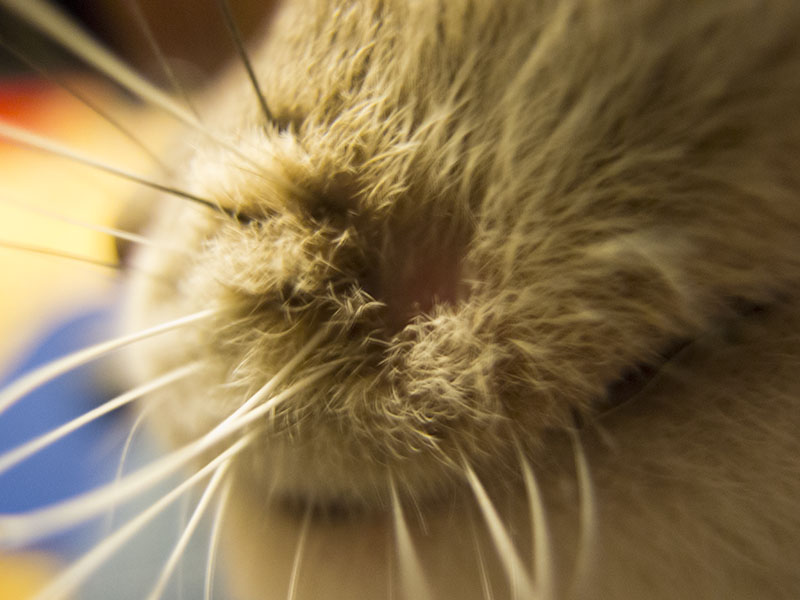 That’s a close up of the left side of Avery’s face, in case it’s hard to tell. There’s a pretty big chunk of hair completely ripped out, and while there’s no blood, there is a small scab as well just underneath that massive patch of missing fur.

It makes my stomach churn.

See Avery was sitting right behind me when this must have happened, as he was sitting next to me on a little footstool looking out a window for pretty much the entire duration of the visit. Which wasn’t long. And I didn’t notice.

I did notice a few times while we were at brunch that there was something caught in Walker’s fingernail. So when I picked Walker up and inspected, I thought he’d taken a swipe at Beau and caught some of Beau’s shed hair, as Walker and Beau get into little cat fights quite often nowadays. I thought nothing big of it and told my brother and Thomas about my find, then Thomas plucked the hair out from Walker’s nail. Since Beau looked fine and didn’t seem to have any hair missing, I assumed that the hair that was pulled out probably hadn’t come out from the root or anything like that – again, just thought it had come from some loose hair that Beau had himself shed. Beau hadn’t yelped in pain so I didn’t know when the swipe could’ve happened. I assumed Walker probably hit Beau before we’d arrived – terrible but there was nothing we could’ve done about it since we hadn’t seen it take place.

But it was Avery. And it must’ve happened on my watch, when my back was turned. Avery must not have made a peep, just a single quiet hiss at most. I didn’t realize the fur was his until literally midnight that night, when I picked Avery up and managed to catch a glimpse of him from this angle. Horrified, I connected the dots and realized Walker must have hit Avery – and worse yet – obviously in a way that did much more damage than I’d originally thought Walker had done to Beau.

Walker’s been picking on Beau for some time now, but while my brother does his absolute best to patrol the situation, it looks like his bullying streak has just stepped up to a whole new level. I’ve told my brother to keep a very close eye on these two and make sure they don’t get into a fight again, as Walker seems to be getting pretty viscous (considering this incident – as Walker’s never before drawn blood or torn out hair like this before – no actual bruises on Beau, just hissing, growling, and weak little hits from Walker before this). Walker and Beau will be separated in just over a week when my brother moves out and takes Beau with him, but until then, I definitely want to be sure Beau is safe, which is why my brother will be taking extra precautions to watch over these two in the meantime.

Avery is just fine. He’s not in pain, though the wound is obviously something he avoids brushing up against, and he will heal up perfectly well and be dandy in no time. But I can’t help feeling sick to my stomach as I’m sure nearly any pet owner would feel. Especially since this happened on my watch. I was right there and I did not even notice this happening. Not that I could’ve done anything to help Avery after the fact, and while I would’ve dove in to protect him from Walker’s swipe, there’s likely nothing I could’ve done in reality as cats are pretty dang fast when they’re in attack mode. I’ll certainly not leave the two in the same room together again, unless I’m holding Avery and am actively making sure that Walker is staying far, far away from him.

To prevent this kind of thing from happening, I’d encourage pet owners that have multiple cats to make sure if they see any type of bullying or fighting going on, to do their best to discourage this kind of behaviour right at the get go, even if it doesn’t appear to be serious at first. If a cat thinks it can get away with hitting another cat, it probably will continue to do so, and while you might think “they’re just cats” and “they won’t do much damage to each other,” let me tell you – they really can. And things can escalate.

It’s your job to protect your pets. I feel like I’ve failed at this job today, but obviously, my guard will be up from now on. I will be watching to be sure that this wound heals nicely and take Avery to the vet otherwise. And as for Beau, we’ll be sure he’s not picked on again until the 10 days are up, and he and Walker no longer live together.