Let me start off by saying that the flight itself, and everything that happened after it, went beautifully, but that prior to our flight, I was pretty panicked.

In my mind, so many things could’ve gone wrong. I was worried that the paperwork we had for Avery wouldn’t be processed properly, worried that he would be in really bad condition when we got to him on the other side, even worried that someone at the cargo company might open his kennel door for a minute and he’d run off, never to be seen again.

But, of course, none of these things happened. Not even close. The trip actually went as smoothly as any trip could have gone. Avery came out the other side a little stressed, which was to be expected, but within a mere full night’s sleep to adjust to a new home, he was content as ever once again. 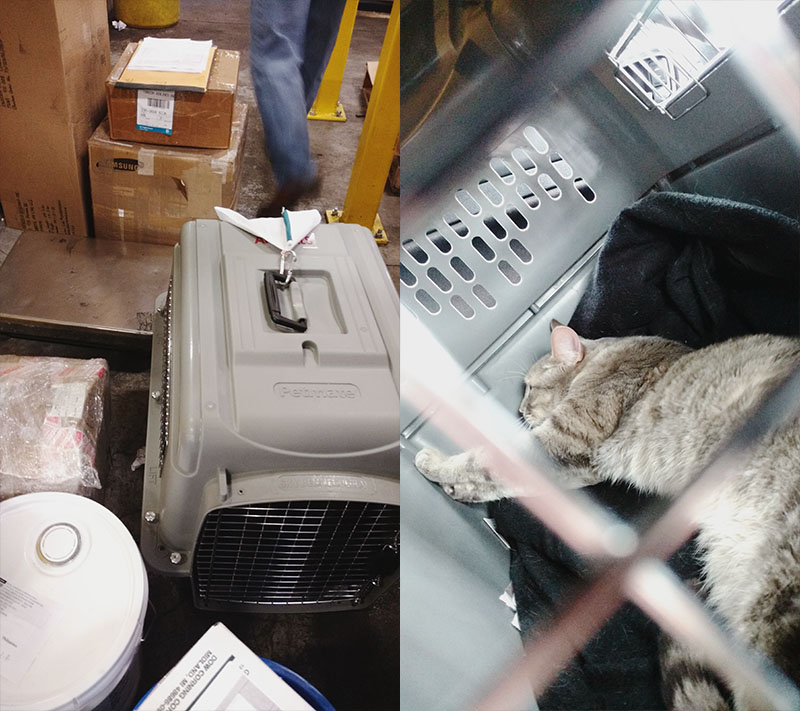 The paperwork process was pretty frustrating – not because it was all that much work, just because we were receiving the same information from so many different sources and organizations. The information was all worded differently, but again, pretty much all had the same meaning, so while I felt like I had to read over and follow the instructions every time, it would’ve been fine to just go with one source and be done with it.

What we had to do was summarized perfectly by the cargo company (IAG Cargo) we used to get Avery onto the British Airways flight. Their instructions (in case anyone is taking their pet on a flight to the U.K. and is curious) were as follows:

1) PET NEEDS TO BE MICROCHIPPED

2) PET NEEDS TO BE VACCINATED AGAINST RABIES

3) THE RABIES VACCINATION MUST NOT BE LESS THAN 21 DAYS PRIOR TO THE DATE OF DEPARTURE.

5) THIS PAPERWORK THEN NEEDS TO BE ENDORSED BY A USDA VETERINARY INSPECTOR.

7) CATS & FERRETS DO NOT NEED ANY TICK & TAPEWORM TREATMENT

8) YOUR LOCAL VET MUST ISSUE A GENERAL HEALTH OR TRAVEL CERTIFICATE NOT MORE THAN 10 DAYS PRIOR TO THE DATE OF DEPARTURE.

9) THE ORIGINAL COMPLETED DOCUMENTS MUST TRAVEL WITH YOUR PET.

10) JAMES CARGO IN HEATHROW REQUIRES A COMPLETED CUSTOMS C5 IN ORDER TO CLEAR YOUR PET THROUGH CUSTOMS ONCE YOUR PET ARRIVES IN THE UK.

Ten steps, that’s all it took. Yet the process felt like a jumbled mess reading through the U.K. government’s website. I know they try to be helpful by including more information, but it’d be nice to also have a simplified list like this to go along with, essentially a check list of sorts.

Just as a heads up to anyone who might be reading this and doesn’t know – you cannot currently take pets to the U.K. in the cabin with you; if you want to travel with a pet to the U.K., your pet has to be in the cargo/hold. This is strict U.K. regulation. 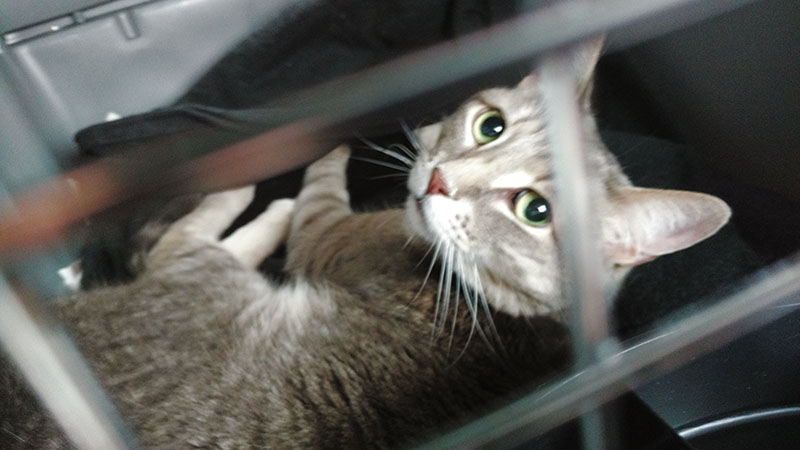 First thing first, we got Avery’s microchip put in (made sure it was U.K. compliant), then had his rabies vaccination done right after (same day, was no problem), booked the flight ticket for a minimum of 21 days after his rabies shot was done (the date of the shot counts as day 0, not as day 1), got the health certificate from the vet 5 days prior to leaving, got the vet to fill in our paperwork (an Annex IV form) took that to the CFIA to get what remained filled out and to have it stamped, then we grabbed an airline approved kennel that left Avery quite a bit of space to move around in, and were essentially ready to go.

The kennel we bought from Amazon (the PetMate Sky Kennel) had been opened previously and didn’t come with any screws, but with a little calling around we found out that PetSmart had a Petmate Airline Travel Kit, so we drove around to two different PetSmart stores until we got a hold of one of these. Better for us anyway, as the travel kit came with a pee pad, extra stickers, as well as metal screws, which Thomas preferred as he felt they were much safer than the plastic ones that were supposed to come with the Sky Kennel.

I didn’t end up using the pee pad as it was too small for our massive kennel, but ended up lining the bottom of the carry case with 3 blankets, two small ones and one big one, that Avery’d been using for quite some time. I was sure these would help him to feel more comfortable because they smelled of him and because they were more comfortable to sit on than a regular pad. It was also nice to have these on the other end when we landed in the U.K., to help him get used to his new home.

We also grabbed Avery a nice leather collar and bought a custom ID tag from Etsy in case he did dart away while staying at my mum’s, while in the airport, or any other time. We didn’t get to use the collar for the airport, as they don’t want anything to be on the cat while flying to make travelling more comfortable for him, but we got to attach his collar to his kennel, along with two portions of his cat food (we did this by hooking a carabiner to the handle of the kennel, then attaching a travel bag to that). We put a paper with his name and our phone numbers in Canada and the U.K. into the bag as well, just in case, and that was that.

The only real hiccup throughout this whole process was that Air Canada wouldn’t take Avery on their planes. At all. They don’t make this obvious on their website, but they wouldn’t allow us to fly with our cat in the cabin nor in the cargo/hold. It took me about 3 hours to get to the point where we figured this out, since I was forwarded to damn near everyone in the province (not kidding here, they forwarded me to a customer service representative for an airport in another city), before getting the same message over and over from customer service that, “Whoops, looks like they don’t give me an option to add pets to any of these flights.” We took that as, “it’s probably not possible, and even if it is, is not worth the trouble,” but since no one gave a definite, “These are our rules for every flight,” because no one really knew for sure, Thomas ended up tweeting at Air Canada for peace of mind and had a full on discussion with them over DM. The discussion resulted in them pointing us to this page that states: “Flights to or via the U.K.: Due to quarantine laws, pets are not accepted in the cabin or the baggage compartment.” When we questioned them on why, they just gave us a jumbled mess of an answer that seemed to blame the U.K. government’s regulation. But British Airways allowed us to take our cat in cargo (as this is allowed by the U.K.) so we immediately abandoned trying to get onto an Air Canada flight and instead booked with British Airways.

On the day we flew out, we brought Avery to the cargo company and were more than little horrified by what we saw. 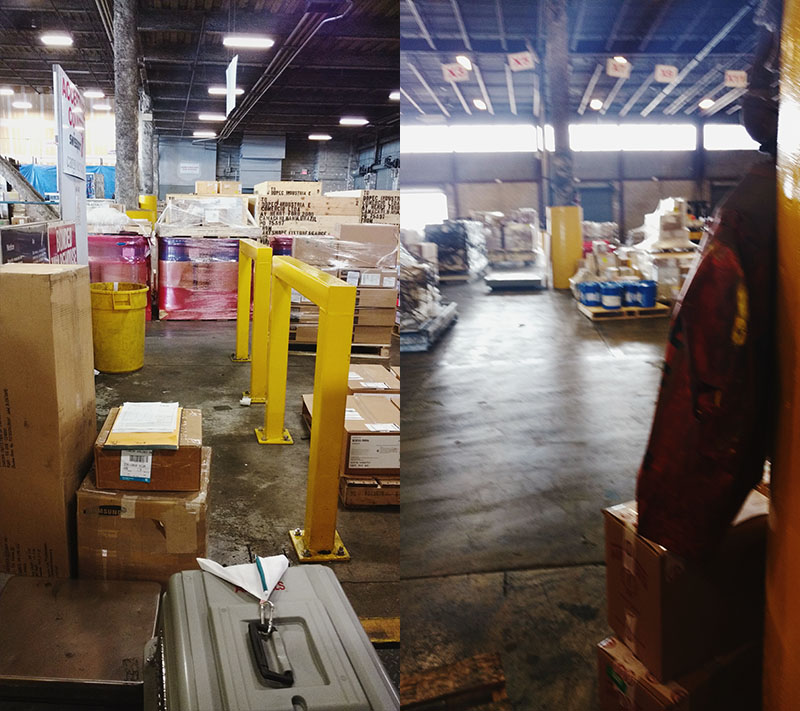 Literally – it was cargo. We were surprised, as we thought they’d have the pets in a different area from the regular cargo, but nope. It was just regular cargo. We hoped Avery wouldn’t get too scared or nervous due to all the big, loud machinery moving around him, but he seemed okay, and they never once opened the kennel – just checked our paperwork, completed quite a bit of paperwork on their end, let us slip some food and water into Avery’s kennel from the outside while it was closed, let us say goodbye to him, and that was that. We didn’t see him again until we were off the plane and in the ARC in the U.K..

Thomas thought he might be able to see Avery go in with the cargo from the airport, but either we missed it or wouldn’t have seen it anyway. 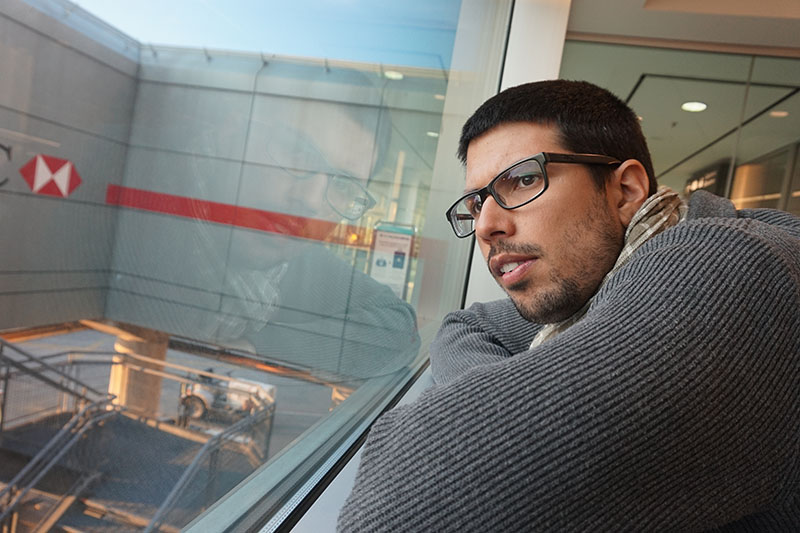 In any case, I did ask a flight attendant once we boarded if she could check whether or not the cat had made it onto the plane, and she came back with a reassuring yes, so that was some good peace of mind. When we landed at LHR and checked into the ARC (took a cab there from Heathrow – in case you’re doing the same thing, advisable to bring cash), they told us he hadn’t yet arrived from the plane. Around an hour later, they updated us to let us know that he had arrived and that it would now take 2-3 hours to process him and hand him over to us. A mere half hour later, way before schedule, he was back in our possession, and the paperwork given to us in case we wanted to use it to turn into a pet passport. We’ve still yet to do that, but we’ll get on it sometime this week or next. They told us Avery didn’t eat, drink, or use the litter box (though all were offered to him as you might be able to tell by the litter on his nose in these pictures), but that he was fine, though of course a bit nervous. He looked in perfect condition to me, definitely confused, but all in all quite calm. Excited to see us, he meowed for a bit as if to say, “What the hell was that? Get me home!” We waited for our cab and were off to Bournemouth with him.

Avery still had another hour-and-a-half car ride to go through, but during it, if this was any indication of how he was during the flight, he was actually very calm and comfortable. Kept changing positions and sleeping sprawled, curled up in a ball, in pretty much a slew of different ways. I was glad we ended up getting him a pretty large kennel, as it really seemed to help him relax. 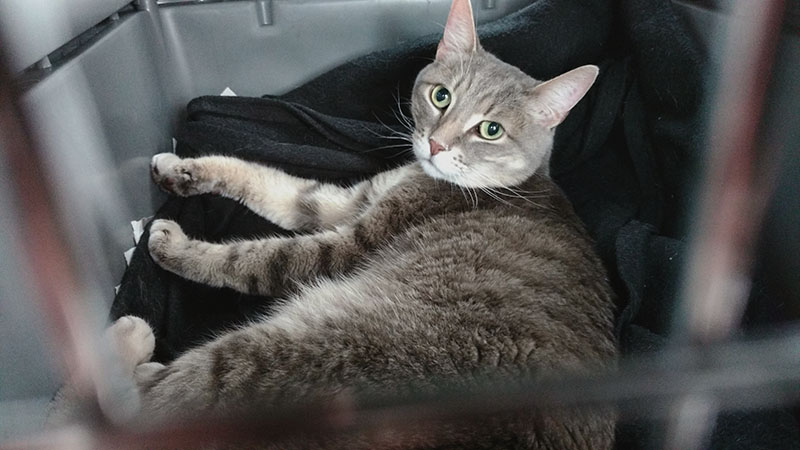 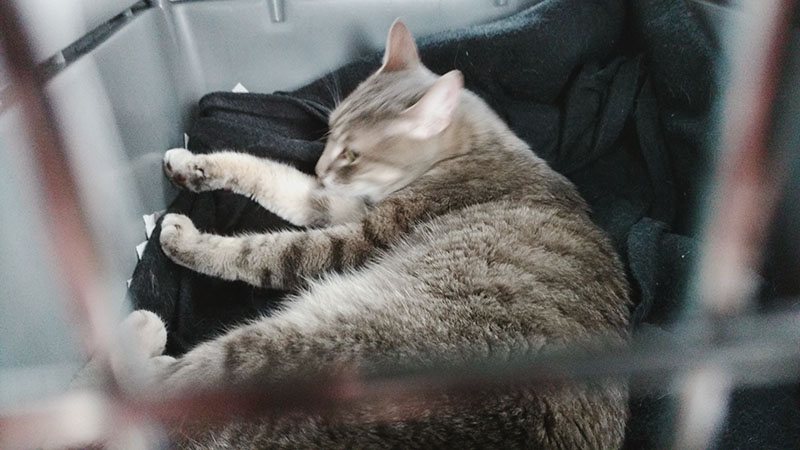 We got home and immediately took out the portable cat litter box we have. He didn’t use it for another hour or so, and he wouldn’t eat right away either, but we didn’t expect him to. He was calm throughout, just a bit nervous, but after a good long sleep through the night, he was back to normal almost completely. Factoring in he was in a completely new environment, that’s all that seemed to be bothering him – new noises and a new home to get used to.

So all-in-all, a good experience, even though we were quite anxious throughout the process. It’s less frightening than it seems, and so long as your pet is in good health, I’d say it’s a fine trip to do; though only if necessary, won’t be taking Avery on flights like this regularly – ever. If he was in the cabin with us, it might be a different story, but until the U.K. allows pets to travel in the cabin, from now on if we do travel with him (within Europe), it will be by car or train.