Fine. I’ll talk about Alicia Keys’ No Makeup Movement. I wasn’t going to – for reasons I’ll bring up later – but this article at JestCafe made me change my mind. I’ll voice my opinions – give it a shot.

First day the headlines rolled out, I told Thomas about the No Makeup Movement Alicia Keys had started. Immediately, he asked me what I thought.

I was excited; glad to have one face without makeup in the media. Yes, there have been many celebrities doing a few selfies or single photoshoots without makeup, but no one really going around without it for long periods of time. Society’s got an obsession with looking up “celebrity name + without make up.” I should know, I’ve Googled these kinds of searches quite often myself. It’s nice to see what people look like underneath all that glitz and glamour.

I explained to Thomas that I hoped other celebrities would jump on board (looks like they haven’t; yes, they’ve taken a few selfies, but no one else has said they would stop wearing make up out and to events to my knowledge). Pretty much was excited to have just some representation in the media of those (like me) who don’t want to wear makeup on a day-to-day basis.

Of course there was the backlash. People saying Keys was shaming girls who wear makeup, others who called her lazy for not “bothering” to wear make up to the VMAs – though how many of these negative responses there are in proportion to the positive I don’t know, because I’ve purposefully gone without looking.

See, I’ve always felt uncomfortable wearing a lot of make up. I hate not looking like myself. Too much foundation does that for me – let alone contouring. I’ll wear powder and a bit of concealer – but won’t go near my face with anything besides that to “cover up.” Not even for special occasions. On an everyday basis I used to wear a bit of eyeliner. Sometimes added some blush and lip gloss. Now I wear nothing, and have been wearing nothing on a day-to-day basis for years.

Why do I go without make up? I don’t really want to wear it. Does makeup make me feel prettier when I do take the time to put it on? Yes. It does. But I work from home and don’t spend that much time staring at myself in the mirror, so I’m lucky enough to not worry about how I look for most of the day.

When I go out, however, things are a little different. Especially having moved from Toronto, Canada to Bournemouth, in the UK. British women wear a lot more make up than Canadian woman on a day-to-day basis. Not a bad thing at all, they in fact do care about their appearance a lot more and they look stylistically way better; but walking outside without a drop of make up on my face makes me feel really self-conscious at times. Not that anyone is judging me – I know it’s just me judging myself.

But it’s enough to have made me want to try to fit in. For a few days, I tried consistently wearing make up out, but then I thought, to hell with it, I don’t genuinely want to, so I just won’t. I don’t need make up at home to feel comfortable and if I’m not going out anyplace special, I’m happy to not wear make up, so I’ll do my best not to be pressured into it.

And then Alicia Keys’ No Makeup Movement happened. I honestly believe it’s just a blimp on the radar of Hollywood perfectionism. I don’t think it’s going to get the traction it deserves. Many people who wear make up religiously sort of get it, but I think unless you put the makeup down for long enough to feel comfortable, and maybe even have a group of friends who will do the same, you won’t really understand how much of a load it is off your back to not feel as though you have to cover up every little imperfection on your body to be socially acceptable. 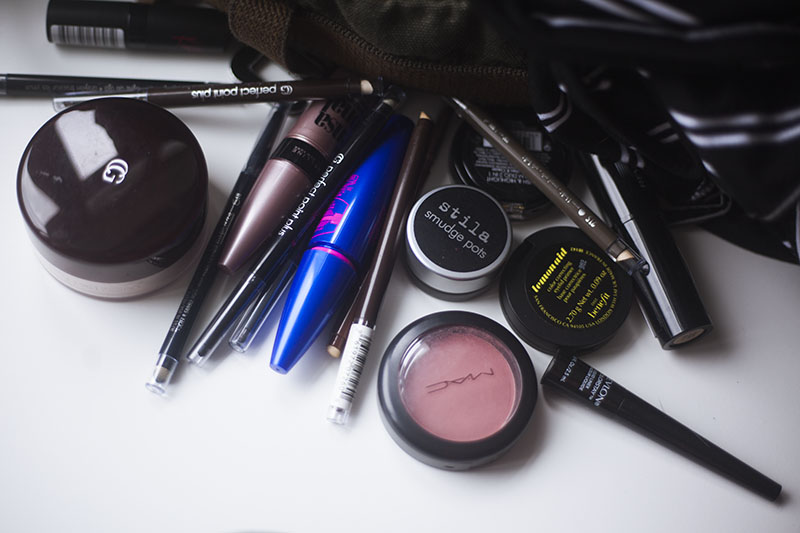 Keys hits the nail on the head for me when she said in her manifesto, “It’s another moment where some piece of you realizes that to fit in or be thought of as beautiful, you have to cover up to be a bit closer to perfect.”

Yes. A hundred times yes. This is how I feel. Not that I’m not beautiful or pretty without make up, but that to fit in, or for others to think of me as beautiful, I have to cover up my face with makeup to be a little closer to perfect.

I don’t want this social pressure, but I know it’s pretty much self-inflicted. Women, we really don’t have these pressures from anyone besides ourselves. It’s other women who look at you and see your on fleek makeup. Men don’t even know when a woman is or isn’t wearing make up. They just notice whether or not they think she looks good, looks hot, or not quite so much. But do they really care about all the dolling up we do? How filled in your eyebrows look or how perfect your cat eye is? No. That’s for other women. That’s so we feel adequate when we compare ourselves to them.

It’s a weird feeling, knowing that everyone in this “woman’s club” so-to-speak hates being judged for her looks, and yet simultaneously having the knowledge that we’re the ones doing it to ourselves. Honestly, it’s so strange, because it feels like if we all called it quits at the same time and threw in the towel, there’d be happier, healthier people everywhere. But we can’t just do that. It’s far too ingrained within us at this point.

It’s like an epidemic of perfectionism – where no matter how much we look at ourselves and think, “We should be more body positive!” we at the same time cannot stop trying to attain perfection. Picking at our faults. It’s twisted, and it’s unfortunately, in my opinion, not got to stop. We can keep pushing, keep trying to attain this goal forever – because we can never be perfect. And so we can destroy ourselves, and future generations, more and more in the process – pushing ourselves further and to more ridiculous extremes (crazy diets, plastic surgery obsessions… make up that takes quite literally hours upon hours to perfect). When will it end? The answer is plain and simple: it won’t. Because we can never get to where we want to be – get to “perfect.”

The only way it can all end – the self-esteem issues, the feelings of inadequacy, etc. – is if we put down the perfection-struggle. And like I said, I think we’re too far gone for that.

I’m happy with being imperfect. I’ve been a photographer for a long time and used to take self-portraits quite frequently for fun. I actually preferred the imperfections, seeing all those pores in my skin, one eye looking a bit bigger than the other, hair nowhere near neat or tidy, so long as I thought they were beautiful. And honestly, to me many imperfections are. I’ve been through quite a large number of images of Alicia Keys on Google; I actually think she’s a good lot prettier in the photos of her where she isn’t wearing make up than the vast majority of pictures of her with it on. Yes, I know, those pictures are photoshopped; but they’re all photoshopped. Yet there’s still something a little bit prettier (to me) about the minimal change that’s been made to her natural features in the sans makeup images. Like there’s more beauty, to me, in minimal photoshopping over heavily photoshopped images; adding shadows here and there, but not deforming the body into something completely unattainable. There’s something gorgeous in the real and imperfect. Something so lovely about looking human.

But I don’t think this is a normal reaction to have to images. Not anymore. No, the norm now is to see those heavily photoshopped girls on instagram with their perfect make up and their perfect filters and want to look like that in real life. Well you can’t. So either we change our taste to be imperfect, or we take down self-esteem in the process. Again – I’ve said it a million times already – but my bet is we’ll continue to do the latter.

When Thomas asked me why I didn’t write about the No Make Up Movement, I told him, “What would I say? I think less people should wear make up? I do. But I’m in a privileged position, and people would be crazy not to point that out.”

It’s true. I have extremely good skin. Barely have had any pimples on my face since puberty. I have dark features, and I know this plays well to my ability to feel happy and comfortable with my appearance in the mirror without makeup. I don’t really need mascara because of how long and dark my lashes are – would I feel the same way if I were born blond? Probably not. I probably wouldn’t leave the house without mascara on.

So these statements of, “I wish less people wore make up” and “I wish more people wore less make up” honestly feel too biased coming from me. I’m one of the lucky ones who doesn’t really need it. But I completely understand why some people do feel they need it.

Make up is something of an equalizer. Not a perfect one, but it does the job of an equalizer quite well. It helps girls who were not born into a time period where their aesthetic is deemed to be the prettiest to be able to camouflage themselves so that they fit in if they want to. It allows people to get a little closer to seeing what they want to see in the mirror. Born prone to get acne? There’s foundation. Have eyebrows that are too thin? Fill them in with a pencil. Same goes for products like hair dyes and plastic surgery. They’re all equalizers. And that’s a wonderful thing about them. They’re all ways to level the playing field between the super-lucky-ones who win the genetic lottery and just come out gorgeous, and those of us who were born mere mortals. Who can fault cosmetics on that?

Does it have to come at the cost of those who wear no make up? Yes, I actually think it does. Once you raise the bar, the average “prettiness” / “hotness” / “perfection” increases. If you showcase only that high standard (which we do), no one will be happy at all being too far off from this increased level of perfection; not if they have a choice.

Which is why I hope to heaven that Alicia Keys’ movement takes off, but I have no real faith that it will.

We’re a far gone. A little too obsessed with perfect.

We should go back to finding beauty in the imperfect; go back to finding those freckles prettier than the foundation that’s covering them up. That’s the only way, in my opinion, to really get our self-esteem back and solve this epidemic on nearly every woman’s back door. Celebrate the uniqueness over the flawlessness.

But I don’t think it will happen.