So it may be a little too early to call it, but I’ve set up a hyper-productive morning routine for myself that’s been getting me to finally do the one thing I’ve intended to do more of for the past year or two and haven’t done exceptionally well: publish more frequently.

Basically, the book The ONE Thing: The Surprisingly Simple Truth Behind Extraordinary Results gave me the kick in the pants I needed. Absolutely nothing remarkable about the concept of just knuckling down, giving yourself 4 hours to do the one thing you think will help you out most, but hey, I’m the type of person who needs things drilled into her head over and over apparently to just get off her ar$e and finally implement/do it.

So I binge read The ONE Thing, and literally the next morning implemented a morning routine I was pretty convinced would boost my productivity enough in the one department that mattered most to me (writing, writing, writing). And it’s worked. So far much better than I could’ve imagined.

The book recommends spending a minimum of 4 hours each day doing your one activity, but I adjusted for the fact that I’d rather work on weekends (to not lose my rhythm) and because I always thought 3 hours was enough to get things done and even recommended Thomas try a 3 hour workday a few months back. And so I now work for 3 hours most every day, though unlike Thomas’ workday, I spend that time specifically on writing.

Now, I haven’t been doing this routine long since I didn’t start (& finish) this book until around 5 days ago, but even though implementation hasn’t been long, I’ve basically gotten more articles drafted and ready for publishing in this short time than I would otherwise have done in maybe 3 weeks. Yeah, that dramatic a difference. 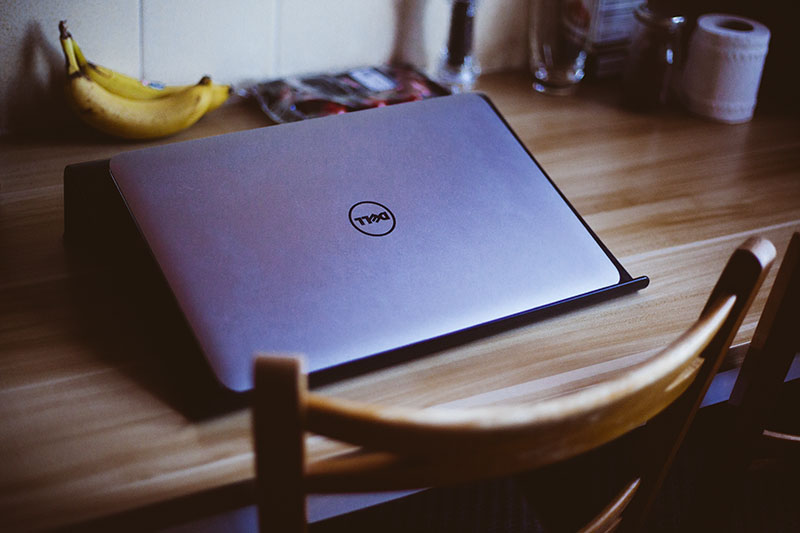 Implementing a Morning Routine That Worked

I have always known that I work best in the morning. Just who I am. But there are so many distractions in the morning, especially since I now feed my cat in the morning at a specific time that can’t be adjusted.

But that’s okay! Because while I was hoping to write out a specific morning ritual and follow it to a “t” every morning, the night I finished this book I was too tired to bother writing some list up and just winged it and it worked out playing it by ear. So basically here’s been my routine. And yes, this is hyper-insane for most people, but for me it works out so well! I’ll get to the why afterward.

The writing usually lasts until 1:00 PM, but if there’s a natural pause, say because I finished an article or two I was working on and am just perfectly happy with what I’ve accomplished, I’ll stop. Today it’s 1:26 and I’ve found myself back in the kitchen working on this article because Thomas is writing a review in the other room and is driven mad by my typing (my keyboard is loud and I type quickly so apparently I sound like a machine gun – huge compliment if you ask me!).

What I Thought Would Go Wrong

Alright so some big hiccups I expected with this whole shebang that did not actually happen:

1. Thomas wouldn’t wake up in the morning and the whole thing wouldn’t work.

Thomas is terrible at waking up in the morning. I can hear him object already, “Unless I have something urgent to do…” Yeah well we’re professional bloggers so what exactly is urgent about anything we do? Let’s be real, he’d rather never wake up, as sleeping in is his favourite thing in the world to do.

So anyways, I begged him the night before I started this routine, insisting that I wanted to take this seriously and really go for a schedule type system to increase my productivity, that I needed him to get up with me so he could make him and myself coffee early in the morning, and so that he could grab anything he wanted to eat before I started working so he could leave me in peace for the 3 hours I was going to work. Honestly, he’s been an angel about it since I’ve started. A tricky little bastard of an angel, though, considering, well take a look for yourself: 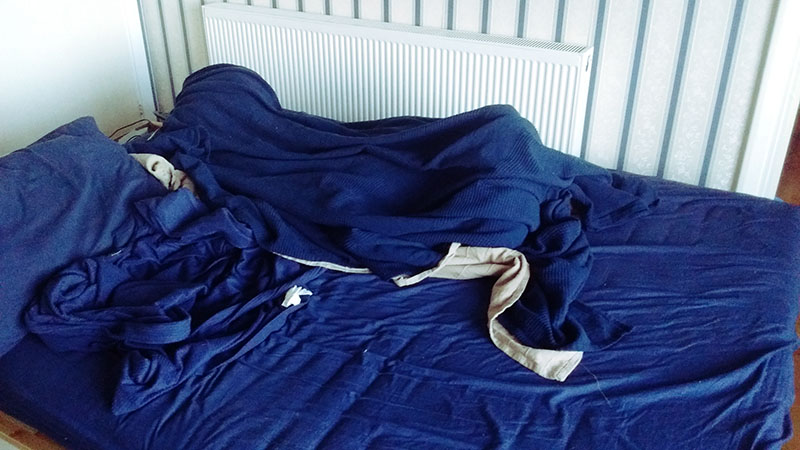 Woken up to this nonsense twice so far. The first time I fell for it, yelling, “Thomas!?! Are you still in bed?!” at sheets once I was done my shower. He lol’d. I made this kind of a face – =_= – and moved on with my life.

Today he did the same, but I didn’t fall for it. And we both laughed. Tricksy one I have here, honestly.

But yes, so support unbound from his side of things, which I’m super grateful for. Next hiccup I thought would happen –

2. Cat would whine to be played with and I’d get really distracted.

Cat whined to be played with. For hours. Still does. Runs in and out of the kitchen as I’m working. But luckily, I just tell him to behave and continue on working. He sulks and plays by himself a little. After I’m done, I go straight to playing with him and he’s happy. Works out just fine and hopefully later he’ll get that he can’t whine enough to get me to play with him when I’m in the kitchen working.

3. Thought other things would distract me.

Apparently, when I’m committed, nothing will distract me nowadays. We have a drippy faucet in the kitchen and this usually drives me absolutely bonkers (even if I hear it from the other room), but I put a dish rag in the sink (still makes noise but better), crack open a window, or with the laundry machine running, I just don’t notice it anymore. So yes, my noise sensitivity made me believe this would be a really big issue, but if I’m concentrating, luckily I just don’t care.

4. Thought I would not do things fast enough in the morning, which would make me late and would throw the rhythm out of whack.

Well, I’ve always been quick to shower, and if I kick myself in the pants enough, I can move really fast. So this hasn’t been an issue for me yet, glad to say.

And while it’s not a big deal to be 10 minutes late into starting, I don’t want to be, which lights a fire under my ass and means I actually have not been yet.

Why This Has Worked Out Wonderfully for Me

Honestly, there are a number of ways this new routine has changed my life for the better (I know, I know, like 4 days in, maybe I shouldn’t be talking yet, but hey – I get where this is going and it’s good!).

Once 1:00 PM rolls around I’ve pretty much done the vast majority of my work for the day. Nothing nicer than having the entire rest of the day to do as I please if I want. Yes, I do often continue to work, but on things I prefer to be working on/things I don’t need to schedule to do. Like fiddling around on social media and obsessively analyzing traffic statistics. And reading business books. Yeah that stuff is fun for me, call me crazy, you wouldn’t be wrong.

2. My most important work always gets done.

I’m a blogger. Yes, there are many aspects to my job, but the most important is actually publishing, and writing up new content is the thing I most often find myself slacking on starting to do. If I get distracted and use some of my time in the kitchen for commenting back on blog comments or replying to those who have asked me questions on my blogs’ social media channels, I don’t usually waste that much time doing these things because I know my time in the kitchen is for writing, and so I get back to writing pretty quickly once I’ve had a minute or two away. This dedicated time to my one most important task, again, comes thanks to my reading of The ONE Thing. I didn’t think it would make so much of a difference to say, “This is my time for just writing,” versus having dedicated time to “work,” but really, it has made an enormous difference.

3. My shower stress is finally gone.

This probably won’t be relevant to you, but since becoming a full time blogger, I’ve stressed out over showers so much. I used to put off showering ’til later because I was in a work rhythm (since I work best early in the morning) which of course ended up causing me to shower late pretty much every single day. But when I shower late in the day, my hair is wet when I go outside (not fun) because I always air dry my hair (I hate blow dryers!). Now that stress is gone. Issue resolved since I now shower first!

Oddly enough, even though I’m kind of a morning person, I haven’t felt that huge kick in adrenaline I used to get when I would go to university in the (late) morning (I never used to sign up for classes before 11 AM or preferably 12 PM – especially since commuting took 30 minutes; I’m a morning person, not an early morning person, okay?). Apparently, I am very much a schedule type of person too, though, because this routine has given me that morning adrenaline back. It’s great. Something I really missed in my life.

I distract Thomas. Always have and always will; that’s what happens when you share a studio apartment and have to live and work in the same space. Luckily, we have a separate kitchen, and when I clear the table, there’s plenty of space for me to work, because otherwise this whole system just wouldn’t be possible. Thomas has informed me that when I’m out of the room, he spends about an hour waking up and relaxing (he is NOT a morning person), then actually gets quite a bit of work done in my absence. So yay! Win, win. So glad for this additional perk.

Don’t know if I’ll be tweaking things. Maybe, but I doubt it since this seems to be working perfectly well. I may wake up at 9 and add dishes to the routine, but that may be a bad idea considering then I won’t want to wake up because ugh dishes…

Likely, this routine will stay just the same, as it’s doing wonders for me now and I just don’t want that to change!