When I was younger, if ever I was asked whether I was a “cat person” or a “dog person,” I’d find myself responding that I was both.

I would’ve loved to have either a cat or dog as a kid, though I had no real chance. My mom was firmly in the camp of “pets are dirty/too much work – why would you want one at all?” My brother begged for a puppy for years, but she never once budged.

When I met Thomas, he was a lot like me: firmly in the could-swing-either-way on the cat vs dog front. While neither of us was a fan of having a big dog, we could both see ourselves having a small dog or a cat in our future.

And then Avery showed up in our lives. 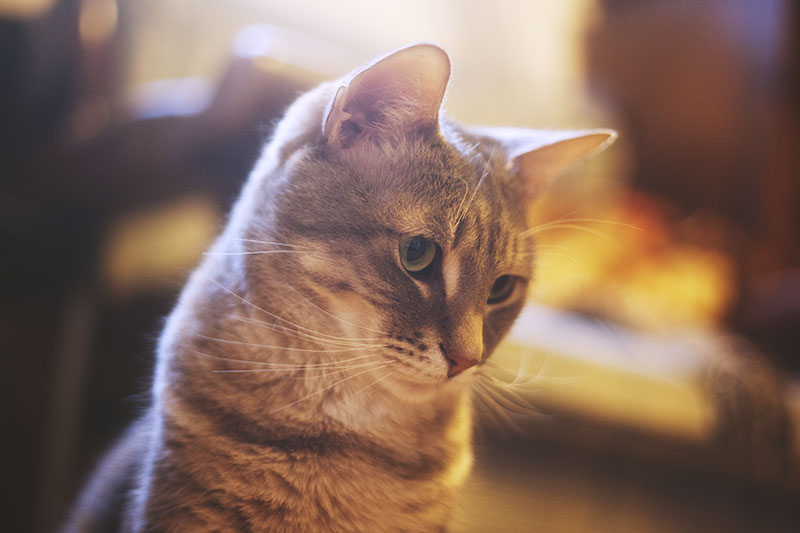 We actually had a pet ball python (a relatively small and docile snake), for a year or so before we’d adopted Avery, and the second we took in our cute little cat, we started feeling like this new family member was a much better fitting pet for us than a reptile. We could still see ourselves having a small dog, but we were as smitten as could be with our cat and so if we imagined having a dog, it would be while also having a cat or two.

This little cutie continued to work his magic on us, however, and over the years, we’ve almost completely lost interest in ever having a dog for a pet at all.

Since Avery’s arrival, my brother convinced my mother to let him get a pet cat. He took in a kitten (named Walker), who ultimately became my mom’s pet because of how close the two are now. This past summer, Thomas and I found another stray/feral cat to rescue (the first cat being Avery of course!), a cat we named Beau, and convinced my brother to take the adorable lil’ guy in. So now between us, we’ve gone from zero cats to three in a matter of 2-3 years.

Each cat has so much personality that it’s hard not to be entertained by these fellas, especially when they’re all under the same roof;

Avery’s the most calm out of the three, behaves very well, has mannerisms that make you think of him as a gentleman, and is (because of just how much we cuddle him) also the most docile when it comes to letting you pet him and when it comes to him sleeping in your lap.

Walker is a talkative guy, mostly because of how much my mother encourages his talkativeness by rewarding it with food. She also chats to him quite a bit. He’s the most outgoing of the three by far and is incredibly entertaining because of how humorously he behaves at times.

Beau is the biggest cutie ever, has the absolute most adorable features, and is quite cuddly like Avery – if you catch him that is. He runs away frequently, but once you’ve picked him up, he sits perfectly happily while you pet and cuddle him. He’s still warming up to humans since he was a feral cat previously, but it’s apparent that his personality is a lot more laid back and chill, like Avery’s rather than like Walker’s.

Watching dogs interact with humans really makes me feel just how much I appreciate having a cat. I know that dogs are extremely loyal, get quite attached to their owners, and are much easier to play with than cats, which are all nice perks to having a dog, but I just can’t imagine having a pet that’s so high-key and high-maintenance anymore.

I mean look at it this way –

That’s how I see things at least. And from this perspective, the winner is clear between the two.

So while I’m not completely writing off having a small dog in the future, it’s feeling less and less likely that I’ll ever really want one. Also, I can see myself having 2-3 cats at a time, but if I have a dog, it’ll very likely be just the one.

Anyway, so I now will definitely be responding that I’m a “cat person” anytime someone asks. Not that I have anything against dogs.. just that cats are so stinkin’ amazing.