…Well not yet. Things don’t work quite that quickly here.

But we’ve selected the type of flooring we want and we’ve made the initial deposit with the floorers, and things should be done, not this Friday, but the one following.

Here was our selection – 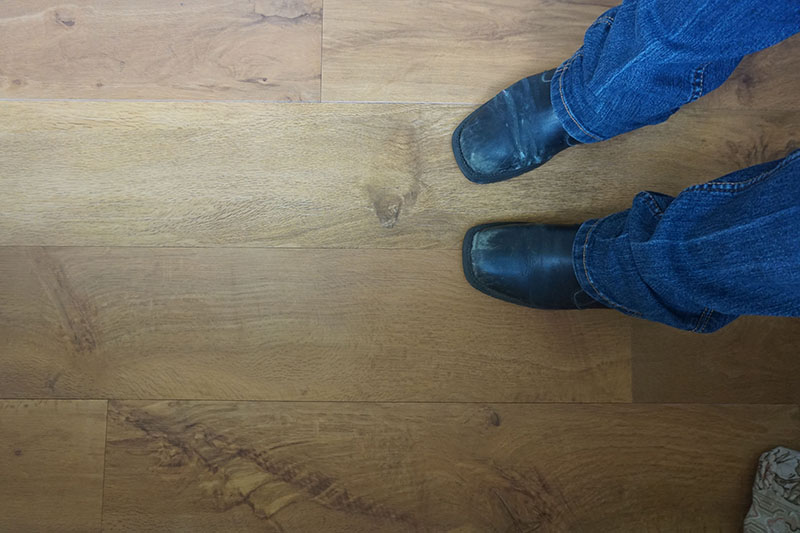 Please excuse the terribly ugly boots, still wrecked from the salt thrown on the streets for the Canadian winter. I am in desperate need of a new pair, have literally been wearing these for close to a decade, but haven’t had the time or desire to grab any with all the other things happening. Soon, though, hopefully!

Anyway, back to the flooring. For the sake of staying as true as possible to what the flooring looks like in the room, I’ve purposefully gone without editing any of the photographs I took; so these are straight out of my Sony Alpha a5000.

Here was our final selection; Karndean’s Wellington Oak (skew is VGW53T for anyone interested). 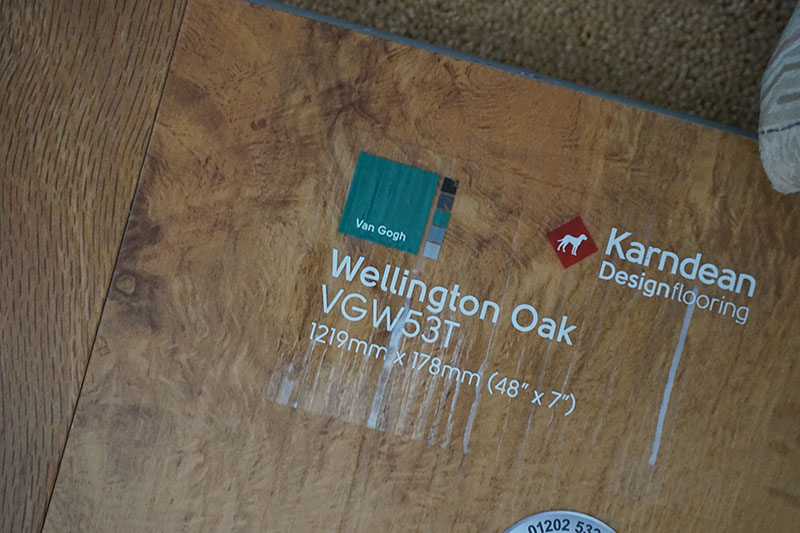 And here’s my rationale behind choosing it;

I wanted something medium in colour (too dark would make the space look smaller), vibrant, yet not too warm (as if it were too warm it would clash with the blue wallpaper, which we’re obviously keeping) and not too cool (as then the whole flat would be very cold, which I’m not the biggest fan of). The vast majority of our furniture will be unfinished pine and white. I’ve already planned out our purchase from IKEA and will order it just after the flooring’s put down. Since the furniture is so lacking in colour and contrast, I wanted these features elsewhere, hence so much colour and not going too light for the floor.

I add this qualifier because I’m usually a huge fan of washed out looking wood, and while I am always a sucker for classics like the Wellington Oak we chose, I’m consistently tempted to go for something with a more rustic vibe and aesthetic. Not this time, but one day! 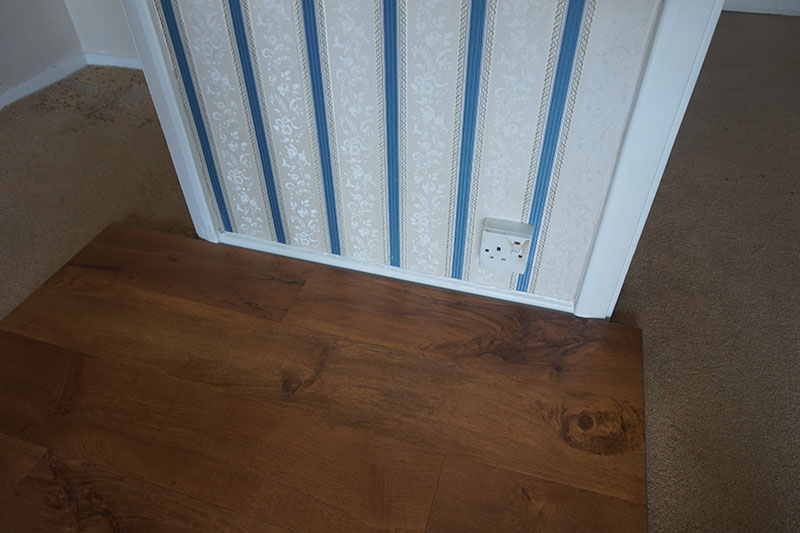 For those who don’t know or didn’t realize, Karndean’s flooring is actually not hardwood. At all. It’s vinyl. Technically “luxury vinyl” but I think that sounds pretentious and a bit unnecessary, so just plain vinyl is what I’ll be calling it.

We went with vinyl primarily because it’s much quieter than hardwood or laminate. We were told that hardwood runs around the same price as luxury vinyl, so definitely not in it to save a buck. This vinyl is durable, even against water, and can be mopped, so we’re happy with that as well because it means we can have this flooring throughout our entire flat (kitchen and bathroom included) and not be upset about spills or dampness damaging anything. That’s what I was initially worried about, which is why I originally wanted tile in the kitchen and the bathroom. But this way is cheaper, as it’s cheaper to have everything done in one type of flooring, and is also, in my opinion, much better looking.

The Wellington Oak flooring we chose comes from Karndean’s Van Gogh line, which is honestly quite beautiful. They have so many different options, even within just that one line, that it can be overwhelming to choose even which samples to try out, let alone which flooring you want full stop. Luckily for me, I’m especially decisive (maybe even picky?) when it comes to interior design, and flooring was no different. I spent 30 minutes looking through options to choose samples in the store, then 30 minutes moving the samples around the flat to see how they worked in the space once they were delivered. I’d made my decision in the first 10 minutes of seeing the samples in the space, then confirmed my decision within the next 20.

Here’s how the Wellington Oak looks by the window – 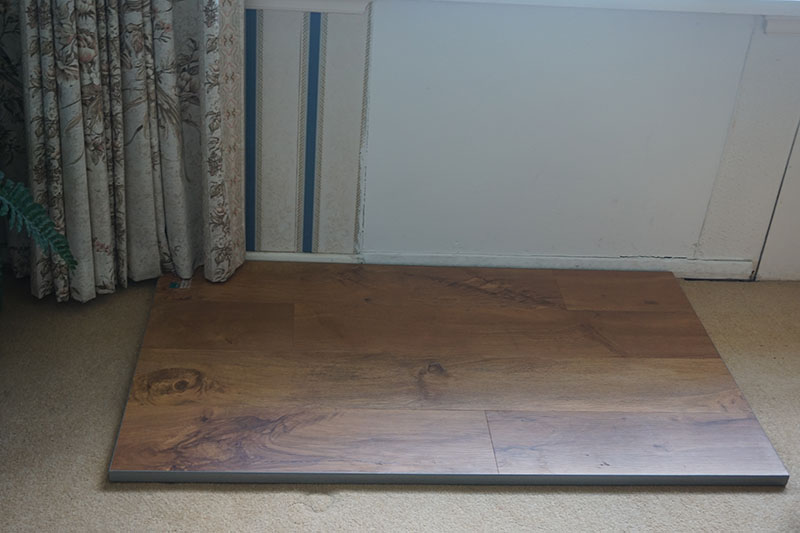 Just what I was going for.

Up close it is so lovely. Part of my worry with some of the more textured vinyls is that they give away the fact that they’re vinyl when they’re photographed up close because of the way the light hits them. They’re also a lot easier to clean the smoother they are, so we were looking at first to get something perfectly flat, smooth, and untextured. But when we laid eyes on this one in the space, well it was pretty perfect and didn’t give away the fact that it’s not hardwood as much as any of the other more textured boards we were interested in. So love at first sight.

Thomas and I are both a huge fan of woods that have non-uniform grain patterns, and where the grain is quite a bit darker than the rest of the wood, so the Wellington Oak was right up our alley. Since it’s not completely uniform, it’s also great for pictures (in my opinion) because when I place objects on the floor in different spots to photograph, it won’t need to look like it’s all taken in the same place. 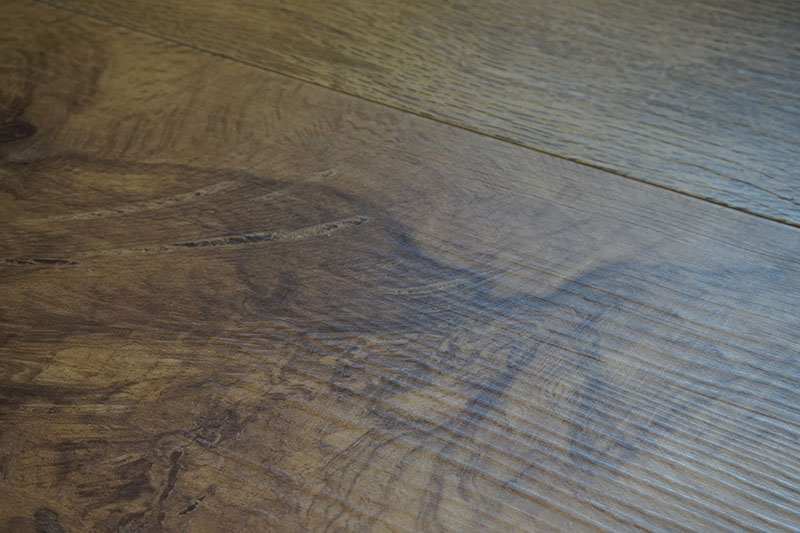 I’m around 98% sure that I want the flooring pannels to be laid down across the flat from left to right, but just to test I did photograph and snap a shot of the sample where it was faced going up and down instead: 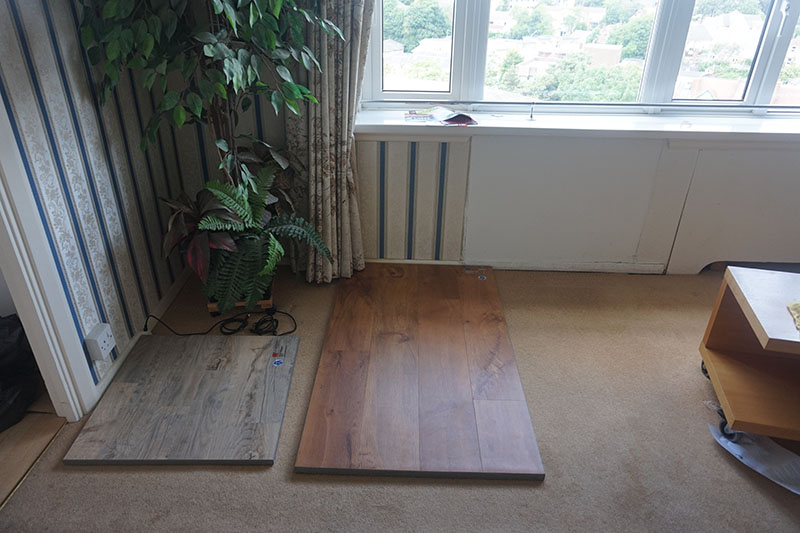 Not bad, but I do prefer across instead.

You can see one of the other samples we tried out sitting in the corner. That one there was the Karndean Artic Driftwood (KP51) from Karndean’s Knight Tile line. We took quite a number of samples from that line as it was supposed to be cheaper than the Van Gogh line we ended up choosing from.

Below you’ll see that we also tried one Moduleo sample, the Country Oak (54852), but we really weren’t a fan. The lighter more washed out flooring options really did not go well with the space. They made the room look very dull and cold, especially because of their bluer hues. 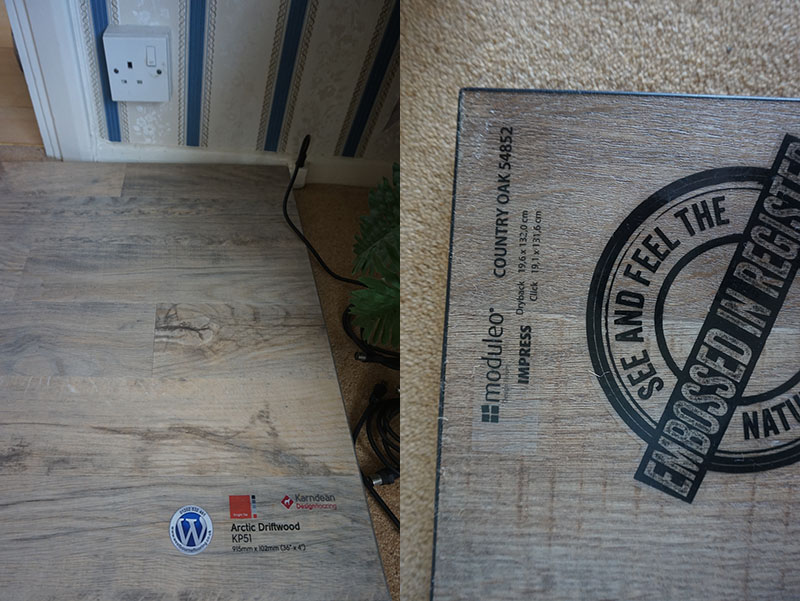 The one option besides the Wellington Oak that worked out quite nicely was – much to my surprise – the Karndean Mid Worn Oak (KP103). Why was I surprised? I thought pretty much no dark wood would work in this space. We did choose the Wellington Oak over this because it had more colour and the medium colour did suit the room more, but this was a great #2, and if I was completely obsessed (and not half obsessed like I currently am) with dark woods, we would’ve gone for this one.

I’m not just saying “we” by the way, I do mean we. Thomas agreed with me, and this was his #2 as well. For some reason, we tend to agree on flooring quite frequently. He usually gravitates more to weird flooring that will look aged in terms of style over the years, though, so I have to reel him in a little, but since he’s pretty a-okay with anything being put in so long as it’s something he doesn’t hate, I’m happy to say I do get to veto a lot of options I dislike, and if I make a good case, he’ll happily let me pick whichever one I prefer.

Again, most times, we don’t feel it’s hard to find something that makes both of us happy, because our aesthetic tastes are very similar, but in case we do, it’s nice to know I can use the, “I really like it, can I please?” card and almost always (unless it’s hideous to him) have him accept the decision. 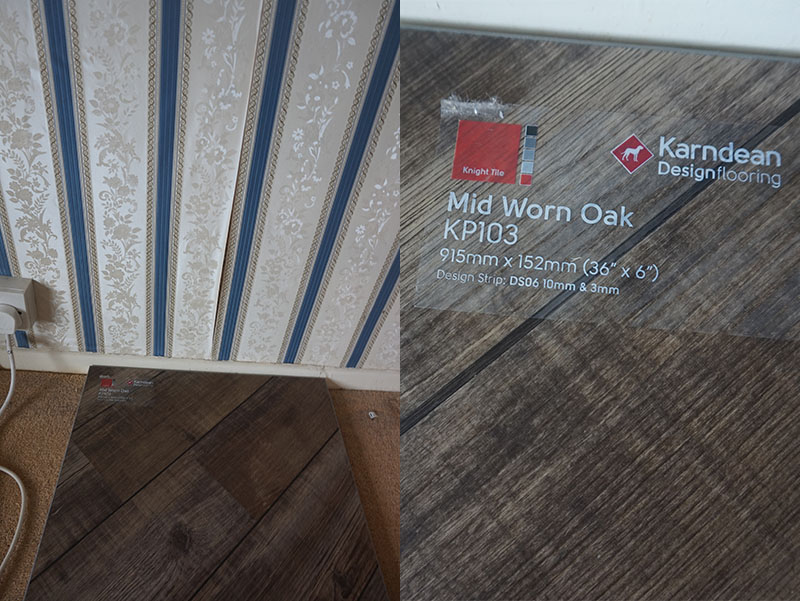 There was another dark wood we tried out that honestly looks lovely in pictures, but only because it made the white balance on my camera adjust. It’s literally got green-hues in person, though you could never tell from the photograph below. Does not work at all with the space, but it looks almost identical to the one above in terms of colour when it’s photographed. Didn’t even bother to take a picture of the name of this one – that’s how little I liked it within the space in person.

Also makes for a good warning – don’t just use pictures to determine what goes into your space. You may sorely regret it. 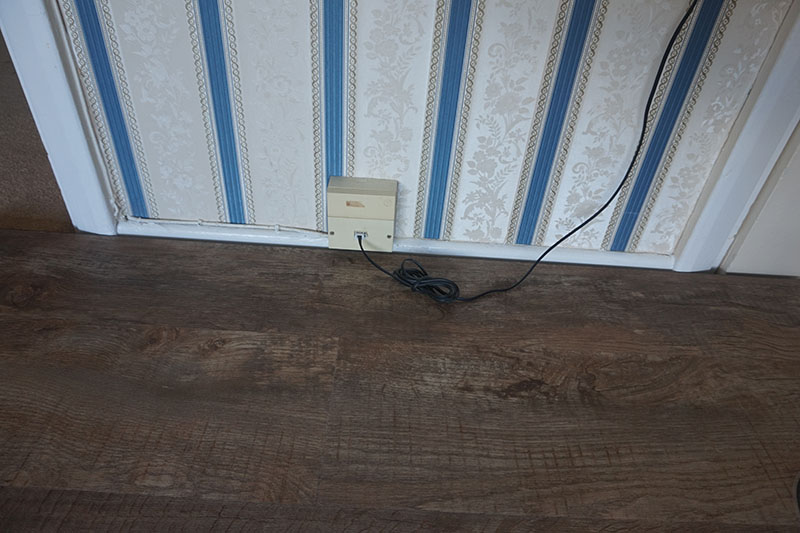 The closest medium-colour wood to the one we chose was the Karndean Lancewood (VGW44T). It’s not bad, but we honestly fell in love with the variant grains and the virbance of the Wellington Oak, so no competition there. 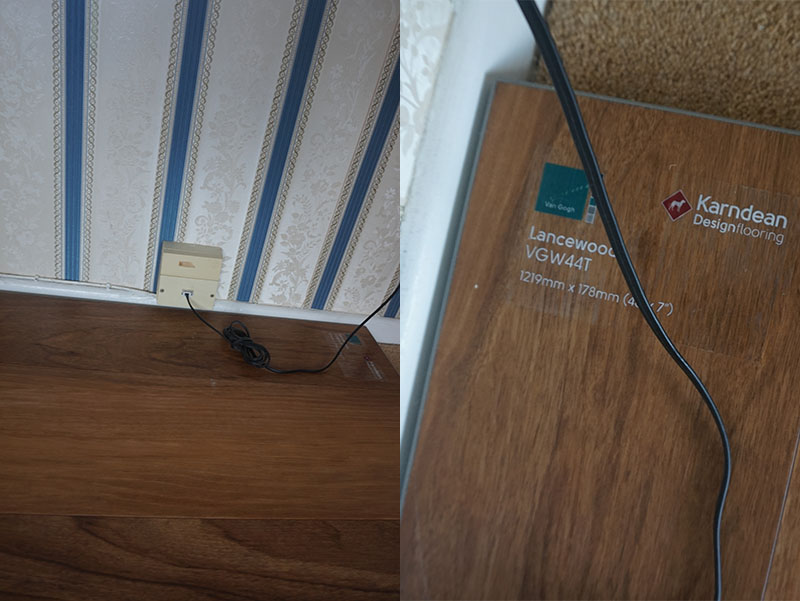 The flooring in the following picture, the Karndean Victorian Oak (KP91) from their Knight Tile collection, is the one we 100% thought we were going to go with when we were choosing the samples in the store. I had picked it out of the Karndean catalog and was convinced this would work out best in the space, especially since it had a lot thinner planks than most of the alternatives, and I really thought the wider planks would clash being placed in the bathroom and the kitchen since the rooms are so small. I was wrong. Sue let me know prior that she thought it’d wouldn’t be odd to have wide planks in those two rooms because it was going to be one continuous flooring for the entirety of the apartment, but I wasn’t completely sold. She was right of course, and the large planks will definitely look fine in small rooms since they continue out of those rooms.

The Victorian Oak looks a lot better in pictures than it does in person. In the flesh, it is a lot less vibrant and colourful. Not quite sure why. Like I said, this is the one both Thomas and I were really sure we’d like best, but from the second we put it down next to the wall we realized something was off. It was a definite no go. So glad we had the Wellington Oak as back up – which goes to show, always take more samples than you think you’ll need, and if something catches your eye, even a little bit, try it out in the space. 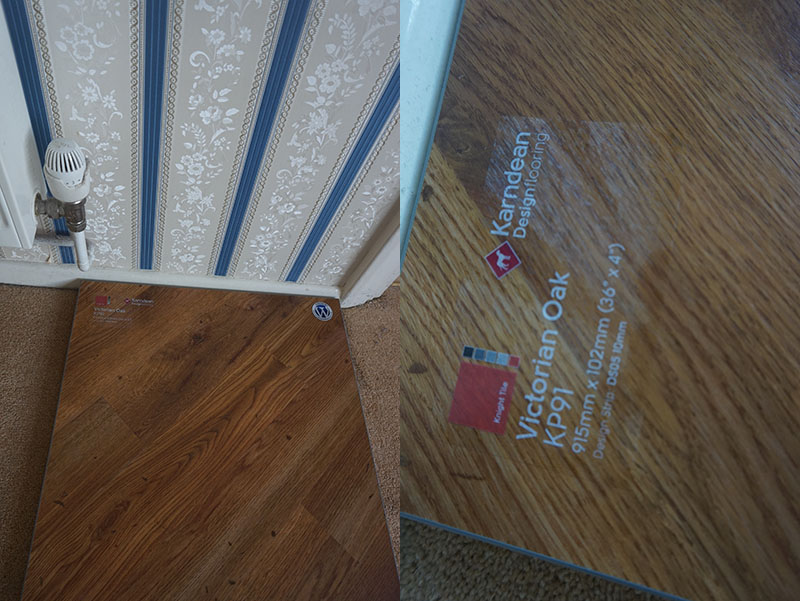 And that’s pretty much it! Was really fun deciding on flooring, especially since we already had the wallpaper up to match it to. Interesting matching the floors to the walls instead of going the other way around. My guess is that almost certainly won’t happen again.

So looking forward to getting these floors put in! Cannot wait for the July 9th weekend to roll around.