So they’re done! Almost ready to move in!

Here’s the close up – 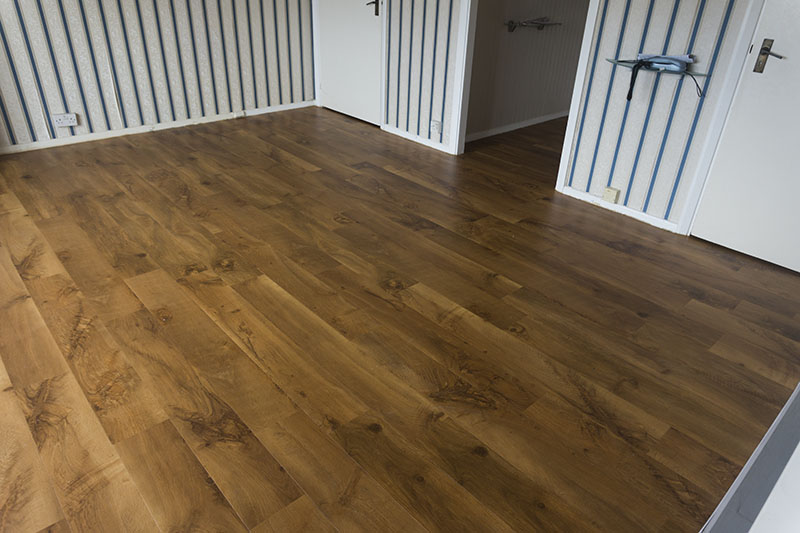 So exciting – the floors obviously change the look of the place dramatically. Am ecstatic we ended up choosing the Karndean Wellington Oak Vinyls, even though they’re a bit more expensive than some other Karndean floors, since they’re part of the Van Gogh line. They’re worth the extra cost considering they’re absolutely perfect for the space – turned out just the way I’d imagined. Again (mentioned in the previous post about our floors), the SKU for our vinyls is VGW53T, for anyone interested. The company that did them for us is Westbourne Flooring. We feel they did an excellent job, but I’ll get more into that later. 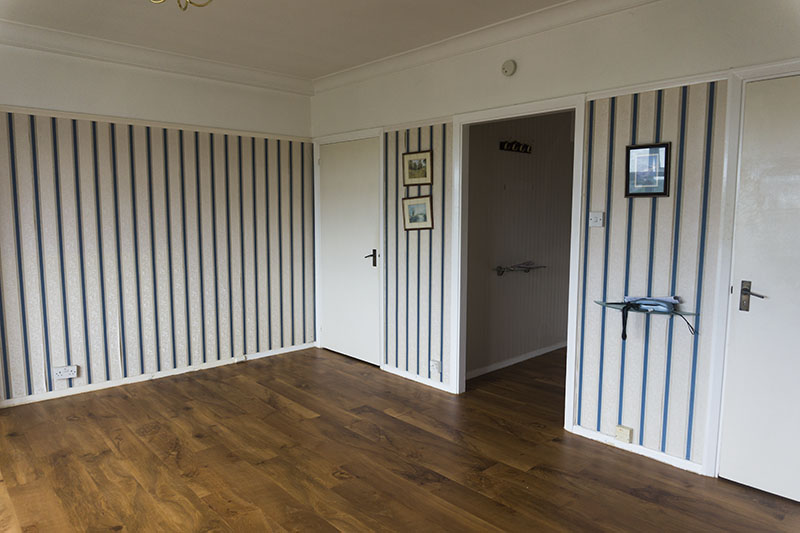 Excuse the clutter, we definitely have sorting left to do, but besides these floors going in, what’s left is an additional door and we’re game for moving in. Might even do so prior to the internet being installed (scheduled for the 19th of this month) – and that’s saying something from us! 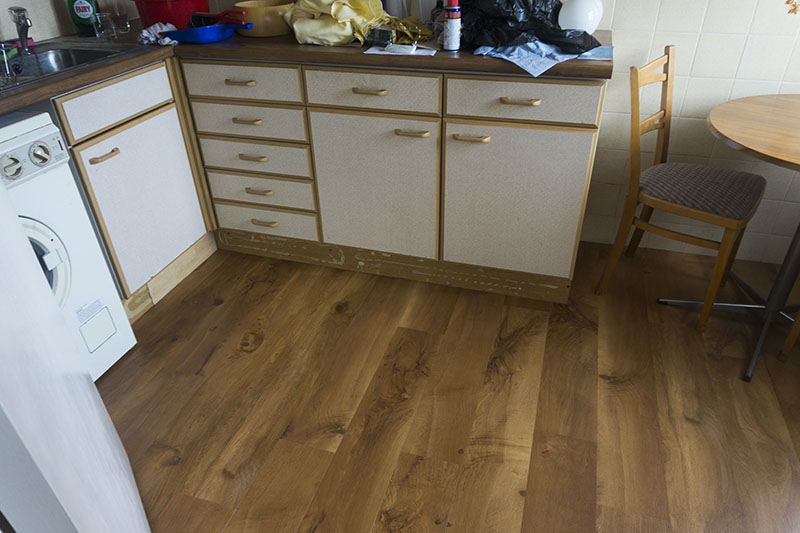 Our choice to do the entire flat in the same vinyl was spot on, in my opinion. Luckily for us it also helped keep costs down, but that was definitely an added perk considering doing the entire flat in one type of flooring was my #1 preference anyway.

And am so happy I chose the direction of the panels to go across the flat instead of up and down it. It really makes all the rooms feel wider.

Here’s the entrance and a closet – 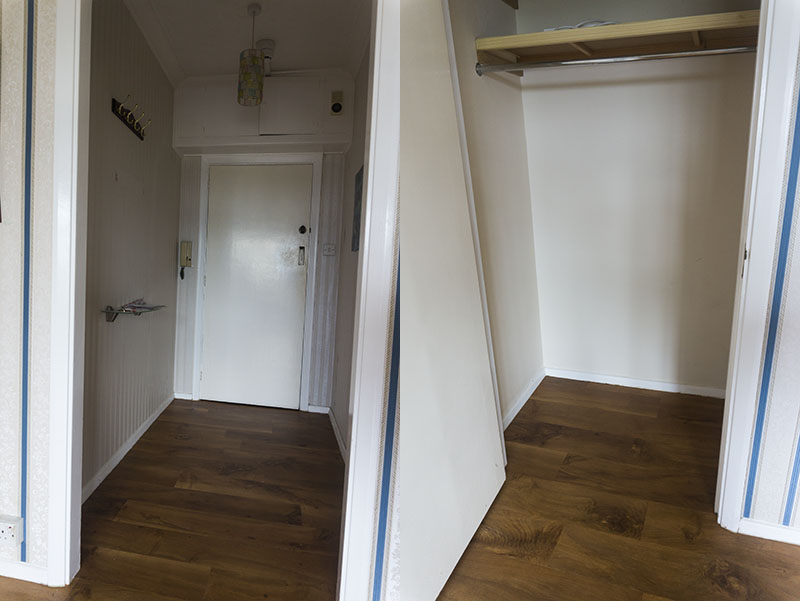 Looks fantastic, no matter what room you’re in. Which is great since we’ve got a white and blue theme going on in the main space, a cream and sort of coral colour in the kitchen (Thomas doesn’t like it, but I happen to!), an off-white cream and now blue/teal/green theme in the washroom. This warm, medium-dark, highly variant grain imitation wood really pulls all the looks together.

We have some really quite tricky bits in our bathroom to get around. They’re honestly so odd, but the floorer did an impeccable job even around here. See how the vinyl pretty much seamlessly hugs those circular bits on the floor? Just what we were hoping for! 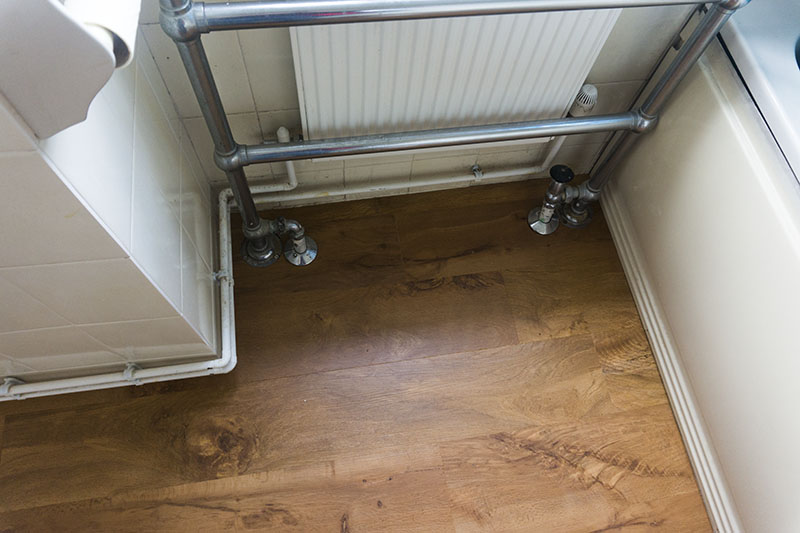 And gorgeous around the toilet and the sink as well. 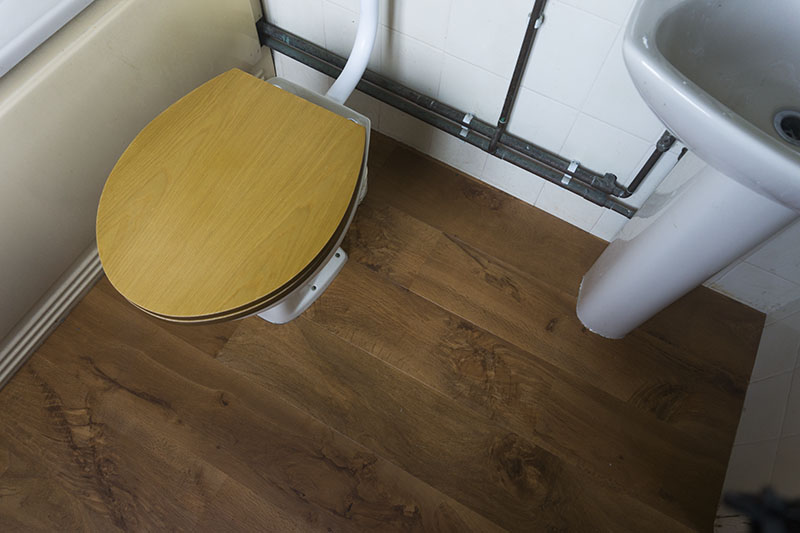 The floorer from Westbourne Flooring came in on Wednesday and was completely finished by Friday – right on schedule. We asked him to give us a text once he was done and he did, so we drove over and had a peek at the flat. Could not be more pleased.

He’d done essentially half the apartment at a time, moving the furniture and appliances from one end of the room and back again so that we didn’t have to move anything out of the flat for him to do the flooring. Everything was left clean and tidy, with a few extra vinyl tiles left behind for us in case we ended up scratching anything down the line and wanted a replacement to slot in. Tore up all the carpet, leveled the entire flat (which is why it was a longer and more expensive process than would normally take), and put in the vinyl flooring.

We’re still a little paranoid about getting scratches on it, but honestly, it should hold up very well. To test the washer/dryer (it’s a 2-in-1 laundry machine – and ended up not working), Thomas had to pull the entire machine out to check behind it. We used cardboard to keep the front from scuffing the floors, but didn’t lay anything down to keep the back un-scuffed. That being said, the back didn’t scuff anyway, and that machine is dang heavy. Not a single mark, though, which we’re quite happy about!

So glad to see that horrible carpet go. And to see it replaced with such perfect vinyl – well I’m floored. ;)