There are quite a few things we haven’t yet spoken about on this blog, not because we haven’t wanted to, just because we haven’t had the time or mind frame to just sit down and flush these stories out. This post in particular, as you undoubtedly already know from the title, will be a catch-me-up post explaining two of the most influential experiences we’ve had in the past couple years: renting out our first home and moving to the UK from Canada.

The intercontinental move we made from Toronto to Bournemouth was not made lightly. We’d been planning one such move for years before we “jumped the gun” and did it. In our minds, it was a process that took much longer than we’d expected, primarily because we had so many loose ends in Canada that needed tying up before we were happy to leave.

We’d purchased our first property in Canada – a 5 bedroom bungalow split up into 3 separate units – two 1 bedroom units in the basement and one 3 bedroom unit on the main floor. This made it the perfect rental property. We lived in it for roughly 2 years before finally moving out, staying with my grandmother for what we thought would be around 6 months before finally taking off to Europe (at the time, we were planning on moving to Toulouse, France – Thomas speaks French so my language barrier wouldn’t be an issue), and in the meantime, had a property management company look after our home.

Things went south pretty quickly. The god-awful real estate agent that worked for the property management company we hired didn’t do a thorough job at vetting the tenant she found us at all; so we ended up with a family of professional tenants upstairs. Calling what this real estate agent did for us “thorough” would be like calling a sleep deprived monkey eating bananas as he attempted to drive a truck safe. We thought this company could be trusted, and they couldn’t. A story for another day, but all in all, we learned our lessons, cut our losses, and moved the hell on.

It was made abundantly clear to us through this experience that we could not simply leave a rental in the hands of a property management company and go spend our lives in another country, so once the professional tenants were out, we fixed up our home, got it ready to sell, set it up for a bidding war (with the help of our own, kickass real estate agents), and sold it for a price we were happy with. We sold in the autumn, could’ve made a lot more had we waited to sell until spring, but at this point we were already a year behind schedule for leaving the country, were just so fed up with absolutely everything to do with the house, and got really a decent enough offer that we cut our ties to the house quickly and started gearing up for our cross-continental move.

6 months at my grandmother’s became 2 years. In that time, we got a lot of thinking done, watched the world be transformed politically, and decided what we really needed was not so much culture and excitement (which would be lovely), but stability, security, and the ability to trust wherever we went next, especially in terms of taxation. It was most important to us that no matter where we chose to be, we’d be in a country that would not try to pull the wool over our eyes while they made brash decisions in terms of taxation for small businesses (we’re self-employed bloggers after all). France was off the table thanks to confusing tax laws for self-employed entrepreneurs. Belgium was too complicated as well. We entertained Spain, Portugal, even Switzerland as options, but ultimately, once we got to the root of the matter – stability, security, and trust where we could lay down our company’s roots we knew, if we were choosing somewhere in Europe, would come in its highest form if we moved to the UK. 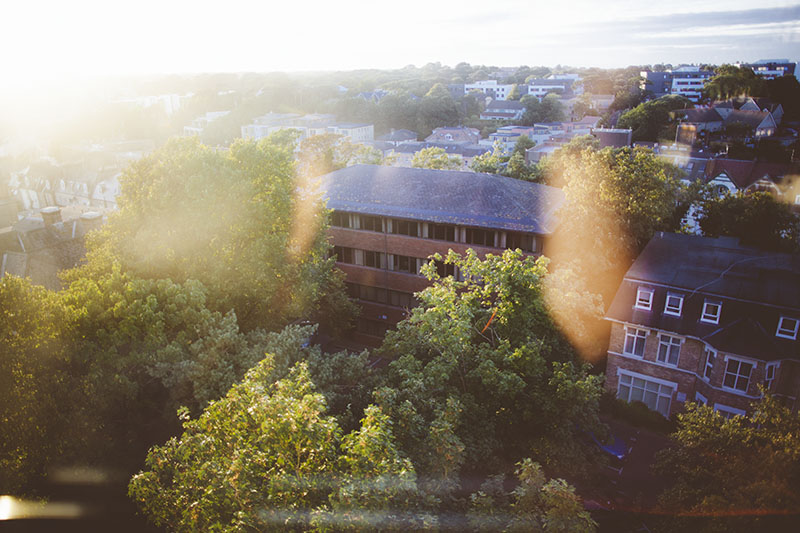 Thomas lived in Bournemouth before he was in Canada; had lived here off and on since he was around 15. Compared to other places in the UK, Bournemouth he knew well, and on top of that, he’s got an incredible asset here – his badass grandmother, Sue, who he’s tighter with than absolutely any of the rest of his family. She’s the most connected person I’ve ever met in my life. I swear, when we first got here, we’d walked down to shops with this woman about 5-6 times and had been stopped at least 3 of those times by acquaintances who wanted to catch up with her. One time she was even stopped by someone driving who’d seen her walking down the street with us. It’s madness. But hey, she goes out, more than my entire family combined, is an incredibly nice person to be around; can’t too surprised everyone wants to chat if you know her. Sue’s also one of those people who’s helpful just because she can be. Never counts favours – just does whatever she can to make everyone’s life easier without ever crossing a line into being more involved than you’d want her to be.

Anyway – as you can tell, she’s more than just a family member, at this point she’s single-handedly an entire family’s worth of assets all wrapped up in one person. Thomas’ familiarity with Bournemouth is part of the reason why we’re here, but if I’m completely honest, she’s the other 80%.  Otherwise we would’ve tried for Southampton, Brighton, or even Edinburgh – the last of which we were seriously considering and actually was our first choice up until the point one week before we got on that plane and headed for London. We legitimately thought we’d come to Bournemouth, visit Sue, then make our way up to Edinburgh to buy a flat. But again – stability, security, and trust won out over our dreams of adventuring new places and being happily enveloped in a new culture.

The novelty sounds like a lot to give up since we had a chance at it, boy were we happy with our decision when we got to Bournemouth. And happier yet the longer we’ve stayed. If we’d have moved to Edinburgh, as everyone in Bournemouth loves to insist, we probably would’ve hated the winter weather. I came to the UK primarily to get away from the cold – so Scotland probably wouldn’t have been a good choice – but it’s one we really wanted to make because we thought Edinburgh was just a drop dead gorgeous city, and everything besides the cold was perfect about it.

If we’d have moved to Edinburgh, we wouldn’t have had the guidance we so obviously needed when choosing where to buy a property. Honestly, Sue’s the most picky person I know, so when we found a flat both she loved the location of and that we loved the interior of – it was clear to both Thomas and I that the stars had aligned and we should snap up this property as quickly as we could.

Course, as quickly as we could still wasn’t all that fast here in the UK. Took double the time to buy a studio flat in cash in Bournemouth as it did for us to buy an entire detached bungalow with a mortgage in Toronto. The process of buying a flat was dire here, and would’ve been so much worse to have had to deal with if we’d moved to Edinburgh, or anywhere else in the UK for that matter. At least here in Bournemouth we were living with Sue during the whole wishy-washy “things get done when they get done; you don’t have a closing date or any idea of when you’ll finally be able to move in” business of buying a home. Imagining going through that process while being in an Airbnb gives me chills.

If we’d have moved to Edinburgh, especially if we bought a flat before the referendum – I hate to say it, but at this point we may even be scared. Why? We came to the UK. On purpose. We never expected the referendum vote to turn up as “leave,” but since it did, that means Scotland may be heading out of the UK in the near future. They’re only a part of the UK because they wanted to stay in the EU, after all. Now that the UK is no longer going to be a part of the EU, my guess and everybody else’s is they’ll be on the first train out to independence from the UK.

Even now, having moved into our studio flat and having spent time here, as the weeks go by we appreciate having chosen Bournemouth more and more. It’s a wonderful place, and while we do believe there could be other places in the world that would suit us better, if this is the closest we ever find to “home,” so be it! We love the location of our studio flat (again, without Sue’s help we probably wouldn’t have nailed a good location), we love the building we’re in; there isn’t actually very much we’re unhappy with, and we’re damn picky people.

All to say, while we struggled with indecision and fretted over whether we’d been making the right choices all this time – the longer we spend here, the more it sinks in: for us, the move to Bournemouth was definitely the best. And without having sold our home in Canada before arriving, we could never have had the flat we’re in now. So here’s to spinning a really bad situation into a pretty ideal one in just a couple years.